William Graves, "Bill" was drafted into the US Military in Battle Creek, MI. He had already had the physical exam at an earlier date. He was aware that things were going on in the world that could actually involve him. Once inducted, Bill and several others boarded a troop train that took them from St. Louis, MO to Battle Creek, MI. Bill wore a nice short sleeved shirt and fairly springy jacket.

When the train got to Battle Creek, there was a harsh change in temperature in the air. Bill's jacket was not enough. The young men taken to Battle Creek were there for about a week. It never warmed up. They remained in their civilian clothing. This proved to be Bill's first bout with pneumonia. The tests and shots were completed on the men and they boarded another troop train taking them to Fort Leonard Wood, MO,

Keeping in mind that the month of March at Fort Leonard Wood is much less than balmy weather, and that Bill was still chilled to the bone, he was hospitalized right away. The down side of all this was that the pals Bill joined up with went on to their training while Bill convalesced. He was physically healthy but was put into a different group of trainees.

His training began. Their Drill Sergeant and Commander would inspect the men and their property (gear) every Saturday. After the inspection, the men were allowed to see a less formal side of their leaders. The men were assembled in their barracks for a chat with the Drill Sergeant and C.O. where situational awareness of what was going on in the outside world took place. (Although it may have happened elsewhere, such a talk with the trainees was very rare in other training environments.)

Bill was over six feet tall. He had no extra weight on his body. In that he was tall and strong, the training group decided he should carry the Company Flag (Guidon) in front of the formation as it moved about the training areas... this was a good idea to everyone except the trainees toward the back of the ranks and files. They were running their butts off just to keep up! Bill had to be moved to a different position.

He was a farm kid who liked the marching, even in rain and snow and the mud. On bivouac exercises it was time to learn to survive in the outdoors. The area around the campsite was quite hilly. Bill was directed to put up his shelter-halves with another soldier as were the rest of the platoon. Bill's squad was to get their encampment near a creek bed. It had been good weather. No one had checked a website (?) to be concerned about rain. The first night it poured rain. Everyone got soaked. Their gear washed a ways downstream. Considerable time had to be spent collecting it back up and drying out and cleaning their weapons.

When it came to rifle marksmanship, a problem came up. Bill was and is blind in his right eye. How that didn't keep him out of the Army remains a mystery. When the men were on the "firing" line, Bill brought it to the attention of the trainers that he was a left (and only) side-shooter. That's a problem! When a man shoots left-eyed, the expended brass will be extracted right into his face – because of the makeup of the weapon.

By holding the rifle a bit differently, he adapted and overcame the problem. Soon it was time to get the formal march across the parade field and on to bigger and better things.

Bill had signed up for engineering. The basis of that skill set is training on exterior electrical work. That involved pole climbing, wiring outside of structures, etc. The training was conducted at Fort Leonard Wood, which has Engineering as one of its branch elements. At least he didn't have to go to a different post! Training went as planned and the men got a short time to be away from the Army then to rejoin at Camp Kilmer, New Jersey. The men were given their overseas assignments.

Bill was to be a part of the 804th Aviation Engineering Battalion. After getting there to England on a troop ship, they were to work on Greenham Common, near Newbury, England. Here, his Army unit was attached to the US Air Force. The overall mission was to transform an old glider base to one capable of a Strategic Air Command establishment handling fighters and bombers. British personnel worked on building the buildings where people lived and worked, while the 804th and others did their work on taxiways, air strips, and landing pads.

The men lived in eight-man tents. The structure was of wooden sides and a canvas upper piece. They were heated with a coal burner that left the men and their clothing with a light dusting of residue each night. The shower facilities and latrines were cinder block and held up during the storms. The mess hall was of WWII construction. British personnel did the cooking. As the work went on, the base began to take on the look of the mission. Bill stayed in touch with home by writing letters. His mother wrote him every day. He still has most of the letters.

Greenham Common was twenty-nine miles from London. The guys would catch a double-decker bus and head to see he historic sites. Working on pay that was about $100.00 a month, there wasn't a lot of money for extra travel. There were some USO shows that came through the area. 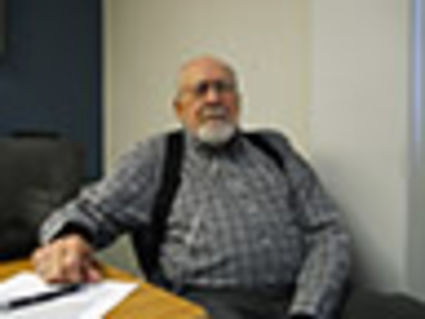 In December 1953, Bill and others were notified that they were to rotate back to the US. The carrier was a troop ship. The return trip was on rough seas. Sea sickness took its toll on many of the passengers. It sailed to a port near Fort Dix, NJ. After a half-day of unloading from the ship, the men of the 804th AEB reformed and moved on to Camp Kilmer, NJ. He was sent on to Fort Sheridan, Illinois to out-process. At his time, the economy was not so good. Jobs were scarce.

Bill worked various jobs for a while then broke from what he was doing to take work at a hospital complex about 3oo miles away from his home. He became a heavy equipment operator there.

His visual problem didn't seem to matter to the employers. Bill had been trained as one who could handle the bigger vehicles. He also knew how to work. Good work and good jobs became a part of Bill's life.

Corporal William Graves, you fit in just fine for so many tasks! Thanks for your service!