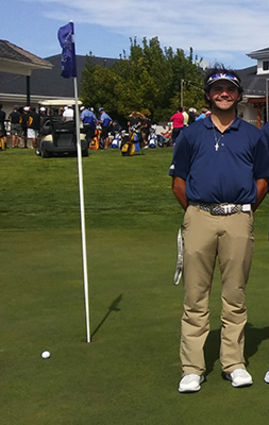 Jordan Greenwood with a big smile after finishing runner-up in the individual standing at the Sterling Tournament this past week. The Southeast Community College freshman shot one under par 72-71 on the two day event.

Kimball High grad, Jordan Greenwood, is liking college style golf and as a member of the Southeast Community College Men's Golf Team, he has been holding his own. In his most recent outing at the two day tournament held at Sterling, Colorado, he finished second with his two day total of 72-71=143. Southeast won the team title handily with their two day totals of 291-283. The only player finishing higher than Jordan was team mate Noha Hoffman of McCook, a sophomore at Southeast, shooting 140.

Jordan and the Southeast team has played five rounds so far and have won four times. At Campus, Jord...