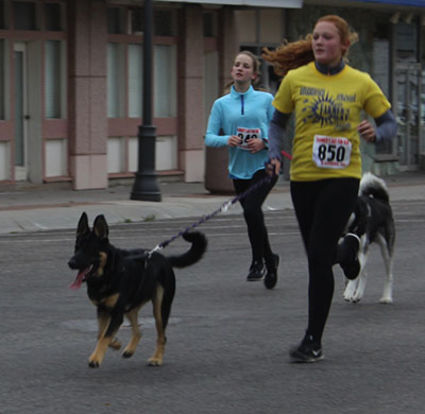 Most runners and walkers at the annual farmer's Day Fun Run had to don extra clothes to stay warm, these two furry friends were just fine with their everyday wear.

The Annual Farmer's Day Fun Run results are in and the top three runners in each age bracket are as follows:

The top four finishes in the five mile run were Nathaniel Mars in the 19 and under bracket, Colby Lukassen in the 30 – 39 bracket, Jason Benes in the 40 – 49 bracket and Stan Fox in the 60 and over bracket.

Girls aged 7 and under were led by JaLeigh Bohac in first, MacKenzie Miller in second and Kyndal Reich in third. Boys in the same age group were led by Kale Dea, Trajan Johnson and Jace Reich.

Faith Bohac was the only finisher of t...