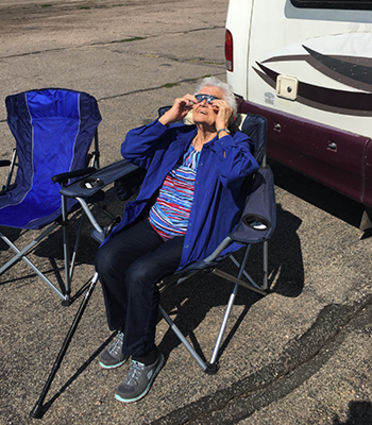 Maxine James viewed the total solar eclipse in Scottsbluff with her granddaughter and her family.

Though she neared 101 years of age on Aug. 21, 2017, Kimball's Maxine James was able to watch a total solar eclipse for the first time.

Maxine celebrated her birthday early, she turns 101 on September 11, by watching the "once-in-a-lifetime" event with family.

At 100 years of age, she would have had the opportunity to view this phenomenon just twice in her lifetime in the United States before this year. The first, on March 7, 1970 in the Gulf of Mexico or just nine years later, on Feb. 26, 1979 in the Pacific Northwest. Maxine was not in the right place at the right time until this year.