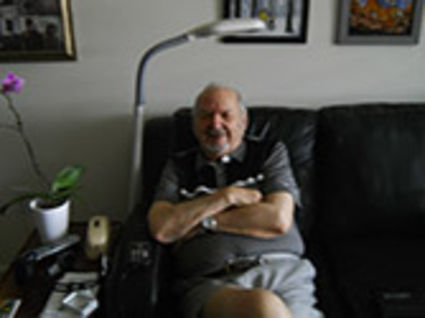 Born in Kansas City, Missouri, Richard Hughes (Dick) and his family relocated to Laramie, Wyoming. By the time he was sixteen years old, he had graduated from high school. Dick went on and took some classes at the University of Wyoming. He wanted to join the Navy...

Dick went to the local recruiter's office and went as far as a physical examination. He was turned down because his vision was not 20/20. Rats.

Dick found a good paying job helping build an airport in Kansas. He worked for two companies and was living large at earning $1.50 an hour, 77 hours a week.

Dick read in a local newspaper that the Navy had dropped their strict vision requirements. The very next day, he went to a different recruiter and inquired about the change. The recruiter told him the new standard and Dick told the man he was going back to Laramie and join up there.

Within a week, Dick was headed to Farragut, Idaho where he would begin "boot camp". (This base was the second largest training facility for the Navy. Over its thirty month time of activity, 293,000 young sailors went here.)

From his college experience, Dick had some training as a platoon leader. He was six feet two inches, yet weighed 118 lbs. The Navy promised to put some weight on him. He learned new terms such as the "head", "bulkhead", "hatch" "galley" and the "sack" to name a few. He was seventeen and aimed to win the war himself!

His trainer was a Chief named O'Brien. O'Brien trained the men for their six weeks teaching the men what the Navy was and how they were to fit in. There was plenty of marching, physical training, and the rest of the list of subjects on the training schedule.

On graduating from Farragut, Richard was on another troop train for Grove City, PA. Here, Richard found himself ill-prepared to be able to handle the regimen of becoming a radioman. When he graduated from this course, he was near the bottom of the class. The instructors told him they were passing him but they didn't have a lot of hope that he would succeed the next level of training.

Dick was sent onto Bainbridge, MD for more school. This class lasted for several months. Here, Dick set a record for receiving and sending the highest number of messages using Morse Code.

Now that he was a trained sailor, he was moved to Norfolk, VA so that he would be part of a crew that was being formed. These were the guys he was going to be with for the near future. They went to Brooklyn and boarded a brand new ship.

The new ship and new crew had to sail a shakedown run. The ship did ok. The guys experienced sea sickness. After the ship went back to the Brooklyn Navy Yard for adjustments, it was good to go.

The ship was the USS Charles E. Brannon, DE 446. This was a destroyer escort. Their route to get to the Pacific Ocean was to go around Florida, head west to the Panama Canal, then join a group of other ships and conduct their mission.

Dick was now eighteen years old, eager to experience it all. The men got some liberty to go ashore and Dick wasted no time enjoying himself. He didn't remember a lot about going through the "lock" system. They went to several other islands including Bora Bora.

On this ship, Dick was assigned to be the "Radioman Aft". There was a Forward radioman and an Aft radioman. His physical station was about the size of an average closet. It had the required equipment, a desk, and a little extra space. This became Dick's duty station and fighting station for the duration of the war. By happenstance, there were to people aboard this ship that had their own living quarters. The ship's Captain, and the Aft radioman. Dick adopted this place as living quarters. He slept on the floor, went to the galley, and to the "head" as needed.

The main mission of DE446 was to escort convoys delivering people and goods in the Pacific island area of operations. In the area were several Japanese warplanes. The pilots apparently didn't think this ship was strike-worthy in that it wasn't attacked.

In their spare time, some of the men participated in a continuous game of pinnacle. There was always someone at the table. When one got off watch, he could always join the game. There were also poker games. On shore leave, Dick said he liked to "chase women"! Sailors found some bars that offered adult beverages. Dick thought that the drinks were all from the same source.

Dick wrote home to his mother as often as he could. (He went on to get a Masters Degree in Journalism from Northwestern.) The heavy storms –especially typhoons- caused quite a movement of the ship port to starboard, forward to aft.

Dick was in Hong Kong when the Japanese surrendered. He heard about the surrender by way of a ship's newspaper that was written and published on the vessel.

Dick didn't return to the "States" until April 1946. Dick left the Navy when he was 20 years old. In time, he was to marry Joan F. Hughes, herself, a Navy WAVE.

Radioman 2nd Class Richard Hughes, your career in the US Navy was momentous! Thanks you for your service!