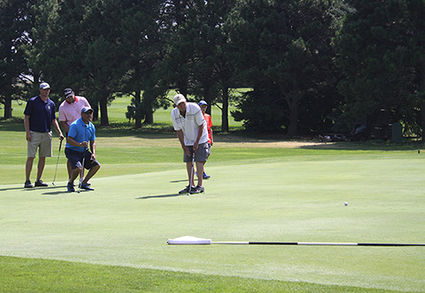 Bobby Wistrom watches his putt on hole number 9 during the closing action of Sunday's play as his team mates watch.

The eighth annual Vince's Corner ABCD Double Draw Golf Scramble was termed a success once again by all involved in the event held this past weekend at the Four Winds Golf Course. This is not only one of the largest events held at the Four Winds each year, but it also a big attraction to bringing home many former Kimball residents, along with golfers from out of town, and out of state areas who want to be included in the golf and the fellowship. Henry Heeg, the Head Man, shut down the entries at 128 golfers, or 32 teams, and had a waiting list of some 20 other golfers ready to step in should a vacancy arrive. According to Four Winds Pro Chad Wise, only 38 golfers had Kimball addresses and the remaining 90 golfers were from out of town. What a boost to the Kimball Business district!

The two-day event began on Friday as many golfers arrived to play practice rounds, and then enjoy the prime rib dinner at the Windbreak Restaurant Friday evening where the drawing for teams for Saturday's play took place. The drawing for both days consisted of 32 ABCD players for each team. Prize money went to the top four teams both days along with the top four golfers in each of the ABCD divisions in the final results. Many very nice flag prizes were also awarded at the awards presentations on Sunday following completion of play. The SKIN winners also took home their winnings from both days of play.

The golfers were treated to food and drink all three days, and were also treated to golf on one of Nebraska's finest golf courses, thanks to Jeremy Williams and his staff. Four Winds Pro Chad Wise and his staff, made sure everything ran smoothly, and took care of all of the golfers wants and needs. The weather was nice, but HOT! Henry Heeg thanked all golfers for playing in the 8th annual Vince's Corner Scramble and is already planning for next year. 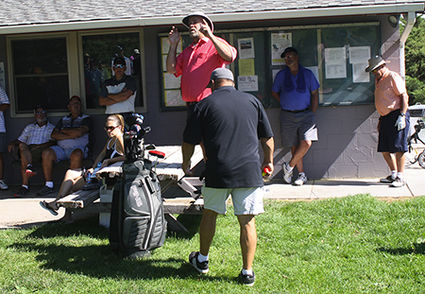 Henry Heeg addresses the golfers prior to the start of play on Sunday morning, the second day of the 8th annual Vince's Corner ABCD Two-Day blind draw scramble held at the Four Winds Golf Course. Henry got overwhelming approval from the golfers to give a donation of an undetermined amount of money, at the time of this writing, to the family of Erin Aerni, a Kimball woman who was killed when hit by a car while she was running just west of Kimball this past Saturday morning. In past years money raised from the betting holes and other donations were given to the Wounded Warriors organization.