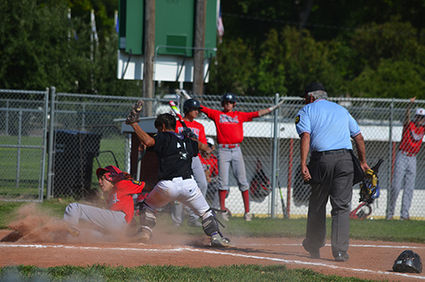 Kimball player Austin Lulf slides into home plate during the game against Bridgeport.

After a hot and humid couple days in Alma, Neb., the Kimball Junior Legion Baseball came to a close this season with the boys playing in the Class C Area Tournament.

The ball players started off the tournament Friday, July 7, with a game against Bridgeport at 5 p.m. Kimball lost the high scoring game 16-21. Your hometown team led for part of the game but Bridgeport came back and took the lead.

"You would think scoring 16 runs would get you the game, but it wasn't quite enough." said parent Bernie Walker.

During this tournament you can only pitch 2 whole games, so both teams were forced to...