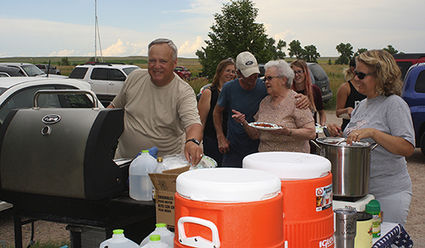 Harry and Ann Gillway served a homemade spaghetti meal at Oliver Reservoir last weekend. Donations were given to the local ministerial association.

Kimball County Sheriff Harry Gillway said that the spaghetti feed at Oliver Reservoir this past weekend was a huge success.

Organized by the Kimball County Sheriff’s Department, the feed raised more than $500 in free will donations to assist the local Ministerial Association in its endeavors, such as housing the homeless in local motels and feeding residents that have fallen on hard times.

Gillway said that he went through four gallons of homemade spaghetti sauce and served over 200 people.

“I should have started making the pasta ahead of time, we had people standing around waiting for...