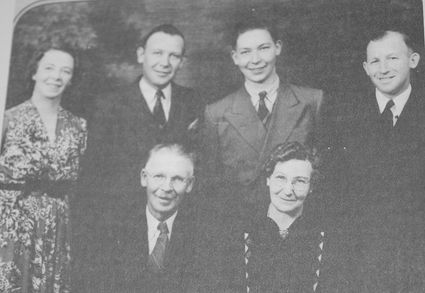 The Adolph Engstrom family. Standing, from left, H. Elizabeth, Lawrence, Carl and Norman. Seated from left are Adolph and Selma.

For more than 100 years the Engstrom family has farmed the ground in Kimball and Banner County, raising cattle and children on the Nebraska prairie, and last weekend they celebrated the occasion with a reunion and dance.

In 1906, Adolph and Selma Carlson married in Rawlins, Wyo., after both immigrated from Sweden.

Adolph and Selma lived in Laramie, Wyo., before heading east to Sidney by wagon. Upon arriving in Sidney they met a doctor who led the couple to a homesteader by the name of Mr. Peterson who was in need of care.

Selma cared for Mr. Peterson and they built their home on his propert...