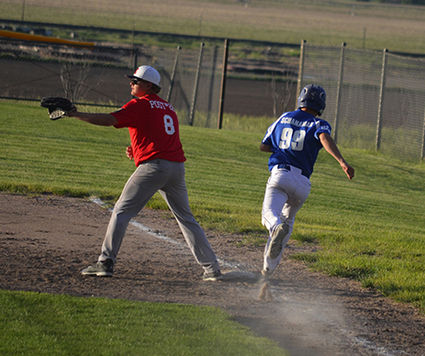 Landon Heim makes it look easy as he tags an opponent out at first base.

After a little misunderstanding and some confusion Kimball and Alliance Legion teams were finally in the same town at the same time.

Kimball coaches thought the game was in Alliance and Alliance coaches were sure the game was in Kimball. After a couple phone calls between coaches, Alliance headed back home to match up with Kimball.

By the time the game got started it was already 7p.m., so it was decided that there would only be one game played on Thursday, June 22.

Our hometown boys lost the single game 12-5, but got through a full seven innings of play. Kimball came out strong and played...