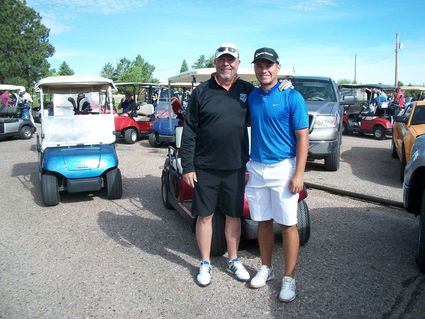 Hobert, left, and Drew Brown at the Father's Day Golf Tournament in Kimball.

The 2017 Father's Day golf Tournament attracted a Nebraska sports name known by all. The noted Husker football kicker Drew Brown, who will be doing the kicking for the Big Red in his final season this fall.

Brown, along with his father, Hobert, shown above, joined up with local golf standout Gary Haack for a weekend of golf in Kimball.

The Browns have local ties to Kimball as Hobert's wife, and Drew's mother, Terri, is the daughter of Sylvia James who still resides in Kimball, giving them a reason to come visit and a place to stay. This is not the first time the Browns have played in the Father's Day, and in previous years, another Brown, and another Nebraska kicker, Kris Brown has played in the event. Kris couldn't make it this time because of other commitments.

Terri didn't make it back this time either as she was in Seattle watching her youngest son, Reed, compete in a very selective track competition where he ran the open 800 meters and finished second with a time of 1:50.03. This isn't even his best event, as he prefers the 1600 and 3200 meter races. You might recall that I told you about him running a sub 4 minute mile a couple of weeks back. According to good friend, Greg Robinson, this is probably his final high school event as now he will turn his attention to the college scene as he becomes a member of the famed Oregon Track Team. His father told me that he has cut back his weekly training to just 70 miles a week. Drew said, "He (Reed) likes to run long races, for whatever possible reason that might be."

The Brown family is also very good friends with Greg and Nora Robinson and their family and they played with the Robinson team on Saturday when you could select the team you wished to play with. Greg told me that they had to pause play on hole number 12 Saturday so they could watch young Reed on their smart phones while he ran that fabulous 800 race in Seattle. I would say that Hobert and Terri have raised three very successful and high-quality young, athletic sons. Kris, of course, at one time at least, held the scoring record at Nebraska with his kicking. Drew is on track to probably follow Kris with an NFL contract to extend his kicking career, and you know what, the entire family is so humble and modest about their accomplishments. Thanks Hobert and Drew for playing in the Fathers Day Tournament and we will be keeping our eyes and ears open to follow the success of both Drew and Reed this year and in years ahead. Kris is now an owner of several Dunkin Donuts stores in Nebraska.