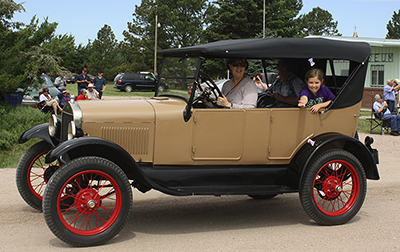 The Banner County Historical Day parade offered several entries, including fire trucks, seen at left, riding lawnmowers, traditional floats and antique cars and trucks, such as the one shown in the photo above. Many parade participants threw candy out to waiting patrons. In addition to the parade, there was a breakfast, a barbecue, a museum open house, games and more.