Legion players continue to improve, pitching has been challenging for the young team 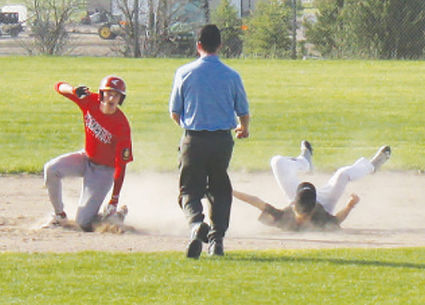 Kimball's runner was safe as he slid into second base over the top of a Bridgeport defender in Thursday night's Legion Baseball game at Kimball. The Kimball team lost both games, but continues to improve each week.

As Kimball took the field at home Thursday, June 1, the young Legion players didn't seem quite ready for their first game against Bridgeport. Kimball had the better bats than Bridgeport and played good defense but when it came to pitching, the local athletes struggled to find a good rhythm. Kimball pitchers combined to walk and hit 17 Bridgeport batters in the first game alone.

Again the hitting for Kimball was on point, Ethan Ratzlaff was two for three with two RBIs, Colton Mielke was one of three, also with two RBIs, as well as, two runs scored. Brady Kilgore and Ethan Bemis added two run...