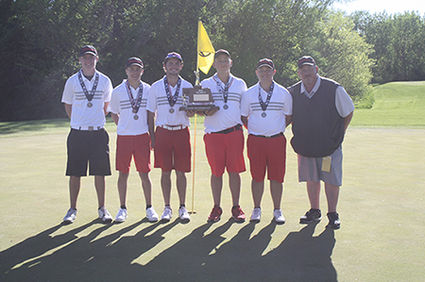 The Kimball High Boy's Golf Team brought home their share of honors from this year's Nebraska State Class C Golf Tournament held at the Meadowlark Hills Golf Course in Kearney this past week. As a team, Kimball finished in second place with their two-day score of 648 to earn the runner-up trophy presented by the NSAA, trailing only the winning team from Lincoln Lutheran that shot 639. On this note, the Lincoln Lutheran team is made up of all five seniors, while Kimball will lose only one senior in Jordan Greenwood and returns three juniors and one senior for next year.

The Longhorns played as consistent as you could ask for shooting 324 both days, and as individuals, they did what they needed to do to stay in contention. Senior Jordan Greenwood closed out an extraordinary career of being an individual state medalist all four years finishing in a tie for third place this year, and he showed the determination, and skill, of a champion in coming back the second day to achieve his success and lead the Longhorns to the runner-up finish. The young man who is headed to Southeast Community College in Beatrice on a full ride Golf Scholarship, shot 40-41=81 on the first day of play in very windy and cold weather conditions, but came back strong on day two with a round of 37-37=74 to achieve his two day total of 155. 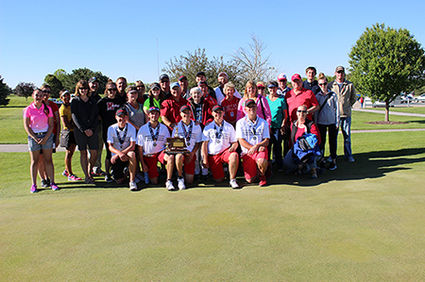 Kimball golf fans traveled to Kearney on Tuesday, May 23 and Wednesday, May 24 to watch the Longhorn team in action at the 2016-17 State Tournament. Following the Kimball team's runner-up finish, local fans gathered with the team and Coach Chad Wise for the above photo.

This year's Class C field consisted of 15 full teams of five players plus 21 more individual golfers for a total field of 96 golfers. This shows more clearly just how well the Kimball golfers competed. As mentioned, the winning team was made up of five seniors so they lose their entire team for next year. Kimball will lose their number one golfer in Jordan Greenwood, but they return four golfers with two year of state experience and they have other golfers on the squad who are ready to take the step up. One thing for certain, this year will be remembered and entered into the record books of Kimball High golf. A salute to Coach Chad Wise and the Kimball High Boy's Golf team of 2017!