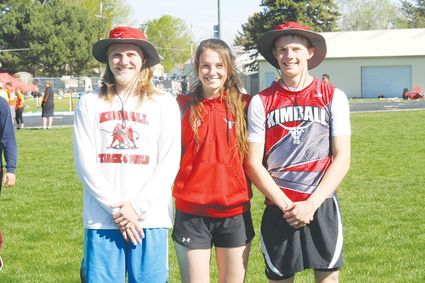 State qualifiers for Kimball for this weekend's State High School track and field meet are, left to right, Jaden Wtihrow in the triple jump, Hannah Biesecker in the long jump and Brady Kilgore in the 110 meter high hurdles.

Kimball will be sending three athletes to the 2017 Nebraska State Track and Field Championships this weekend at Omaha Burke Stadium, and the honored trip consists of senior Jaden Withrow in the triple jump, junior Hannah Biesecker in the long jump and sophomore Brady Kilgore in the 110 meter high hurdles.

This will be the fourth trip to Omaha for Withrow who won his pet event once again at the C-11 District held at Mitchell this past Friday, and it is the third time he has emerged as the District Champion. He is also returning to Omaha as the defending champion in the event in Class C!