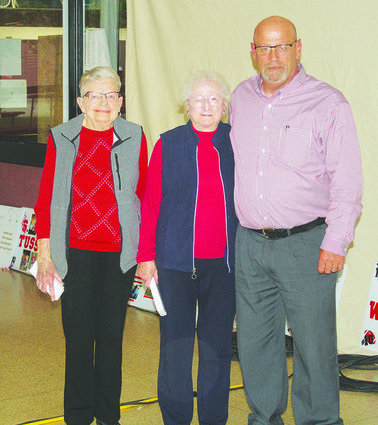 Fayann Cain and Donna Talbot were voted into the Booster Club Fan Hall of Fame at the banquet after Chauncey Pedersen gave a glowing run-down on their attendance and support of KImball High Athletic events.

A full house for the 2017 Kimball High Booster Club Awards NIght and Banquet this past week. After a welcome from MC Jeri Ferguson, and a prayer as well, the students were given the go-ahead to attack the food tables including the brisket sandwich meat prepared by Dave Klinkhammer. The parents and other adults then followed.

Starting with the freshman class the letter winners came front and center to receive their individual packets of awards, ninth through 12th grades. Special awards were then handed out including the WTC Scholar/Athlete awards presented to Jannel Fiehtner, Alex Reader, and Logan Stahla and the WTC Scholarship given to Miss Fiehtner. Jannel was also the Outstanding Senior Athlete this year, and was presented the Keith Staehr Inspiration Award Scholarship. Jaden Withrow was the lone 12 sport athlete of his four years as a Kimball High Athlete.

Fayann Cain and Donna Talbot were elected to the Booster Club Fan Hall of Game and Chauncey Pedersen gave a glowing, and humorous run down on how they were always in the same spot, high in the stands on the west side of the bleachers, for all home events, where they received special treatment such as delivery of their favorite treats from the concession stand. I might add that this pair travelled well also and could be seen at most all events the Longhorns were involved in.

This year's Athlete selected to the Hall of Fame was 1986 grad Jeff Fiehtner and his former football and track coach. Mr. Keith Staehr made the presentation telling the audience of the many outstanding awards and records that Jeff attained as a student/athlete at Kimball HIgh. Jeff still holds Kimball HIgh Track records, as well as being near the top of the list for his many football accomplishments. 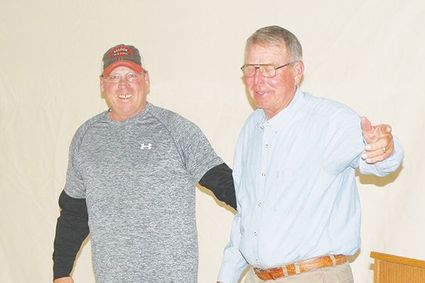 Jeff Fiehtner, a 1986 Kimball HIgh grad, was voted into the Booster Club Athlete Hall of Fame and was presented his award by his former coach, Keith Staehr after coach Staehr gave a long run down and history of what Jeff had accomplished during his glowing Longhorn career, including setting records in track that are still standing, as well as football events. Coach Staehr became quite emotional during the presentation as could be expected.

The Booster Club also handed out scholarships to Jannel Fiehtner and Raelynn Hinton as a high light of the night, and Stephanie Pedersen gave a run down on what the Booster Club does to support the athletic programs of Kimball High. The head coaches also reported how they use money given to them by the Booster Club for their respective Sports.

Spud Rowley was recognized and given an award for his broadcasting of Kimball sporting events on the City Link, another Booster Club sponsored activity. Stephanie also listed all, or many, of the other projects the Booster Club does including printing calendars, making pennants, the "Seat of the night" at home games, buttons, fund raisers, feeding athletes including visiting teams, $1,000 in Scholarships, selling Kimball apparel, putting on the annual banquet, the Facebook pages, and others. Stephanie also said if the Booster Club is to continue to function, more parents need to step up and become involved. Anyone interested needs to contact either Stephanie, or one of the other officers.

The Night concluded with a video show of the many sports and athletes with Kerry Ferguson credited with putting it all together and running the show. The Senior athletes were given their pennants and boards as the night ended.

For photos, please turn to page A8