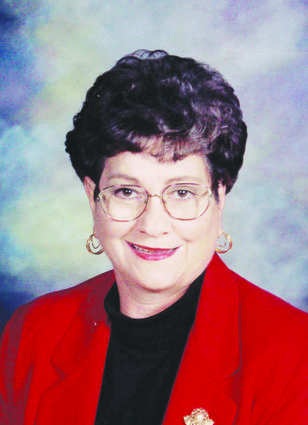 Jacqueline "Jackie" Brown, 82, of Kimball, died at Kimball County Manor on Thursday, April 13, 2017. Funeral services will be held at 10:00 a.m. on Saturday, April 22, 2017 at the Cantrell Funeral Home in Kimball with Pastor Carla Gunn officiating. Burial will be in the Kimball Cemetery. Visitation will be held from 9:00 a.m. until 10:00 a.m. on the day of the service. Friends may visit http://www.cantrellfh.com to view Jackie's Tribute Wall and leave condolences for the family. Memorials have been established to the Kimball County Manor. The services for Jackie have been entrusted to the Cantrell Funeral Home.

Jacqueline Joyce (Gentry) Brown was born August 2, 1934 to Robert Homer Gentry and Opal Mae (Rogers) Gentry in Crook, Colorado on the family farm. They moved to Los Angeles, California for a very short time before returning to Crook. She graduated from Crook High School and then moved to Sterling and graduated from Northeastern Junior College. She became the receptionist and bookkeeper for the Higgins Motor Company in Sterling. On May 27, 1956 she married Curtis Eben Brown. In August of 1957 they had a daughter, Susan Rae. Shortly thereafter they moved to Casper, Wyoming then to Kimball, NE where they then had a son, Jerome Kevin. A few years later they had another son, Robert Gentry. Superior Oil moved them to Dickinson, ND for 2 years, then back to Kimball. Jackie worked as a teacher's aide in the special education department until Curtis was transferred to Fairview, Montana in 1983. In 1986 they moved back to Kimball where they lived their remaining years. Jackie's main occupation was homemaker. She was a member of Trinity United Methodist Church and its Circle of Hope, Beta Omega ESA, KEEC Extension Club, Bible study group, and the Kimball County Hospital Volunteer Coordinator for 9 years. Jackie loved reading, flower gardening, painting, sewing and handiwork, but most of all she loved her family and was completely inseparable from her husband of 61 years.

Survivors include daughter Susan R.Gierhan of Kearney and her husband Randy Smith; her children Jonathan Gierhan and wife Sarah and their twins Ava and Isabelle all of Kearney and her daughter Jenny Gierhan of Lincoln, NE. Son Jerome K. Brown and wife Nancy, his daughter Tiffani Floyd and husband Steve, and their children Garrett and Bailee all of McPherson Kansas, Trisha Langteau and her daughter Nevaeh of Rohnert, CA, Toni Schlager and her husband Jared of Las Vegas, NV, Daughter-in-law Tiffany Brown of Chadron and her children Jaelyn and Theron all of Chadron, Austin Brown of Lincoln,NE., and Trey Brown of Gretna, brother Gary Gentry and wife Marlene, Peetz, CO., and numerous nieces and nephews. Preceding her in death are her sisters, Dorothy Lee and Bobbi Lee, her son Robert Gentry Brown and son-in-law Michael Gierhan.