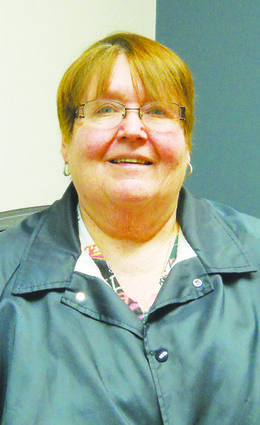 In May 1964, Beverly Webb graduated from Sheridan, Wyoming High School. The following month, she enlisted in the United States Army. She knew that she wanted to get as much schooling in accounting as she could get. The Army offered her some great training and a skill. "Sign me up!"

At that time, female enlistees had to be twenty-one years old to enlist without parental permission, but her parents signed on saying the Army had their permission to train their daughter. The US Marines and the US Navy were also interested in this prospect because she grew up on a ranch and knew how to make things work – especially mechanical things.

She passed all the tests including the physical and was sent on to Fort McLellan, Alabama – the only womens training place in the Army. She arrived by aircraft. A taxi took her and a couple of other young ladies to the military post.

They were greeted by female Drill Sergeants. (From that day until they graduated, they never saw a man!) Beverly said that basic training for women was much different than it was for men in those days. Once there was enough female recruits on hand, they formed up a Company. They were evaluated for length of hair...as long as it didn't touch the collar, they were good.

Next, lets get uniforms and clothing. Particular attention was paid to the fit of the clothing. It had to be just so...or close to it. At the time, this was very important. The young trainees were then marched to a building that looked like most of the other buildings there. It was a cinder-block barracks. Their cots were aligned individually, not stacked. The female recruits were assigned alphabetically, one side then the next.

The basic training consisted of post-high school subjects of history and English. They learned to do some marching and some drill and ceremonies, but in a tacit mode, so to speak. They were trained in how to be a lady. They were instructed how to put on make up; how to present themselves; how to correctly wear the uniform; etc. Their mission was no to go to the fight, but to relieve the male soldiers occupying positions so the male soldiers could join the fight.

In their living quarters, they 30 young soldiers were taught the military way of making a bed and keeping things very clean. The bay they were assigned to had cots on each side. In the middle area, there were to cots. It was called " God's aisle". This middle space was highly polished -nobody could walk on it. Usually, they shined it with a buffer. When that broke down, they learned to use female sanitary hygiene products to shine the waxed floor!

The young female soldiers had two uniforms. First was what was called a "PT" uniform. It was worn almost daily. The uniform was made up of a brown blouse, white shorts, and a skirt that was worn atop the shorts. They wore brown socks and boots that were called "Little Abners" because they looked like the boots that a Daisy May character wore. This uniform had to be starched so it could stand by itself! After starching the clothes by hand, and thoroughly drying them, they could stand the uniforms in "God's aisle" to dry.

They also had a dress uniform that would be used for more formal occasions. This was a light green, polyester uniform with dark green piping, consisting of a skirt and a blouse. Black shoes were worn as a part of the uniform. The hem of the skirts, by regulation, had to be two inches below the knees.

The female recruits were of different heights and weights and color. They were given money by the Army to go into Anniston, AL to buy shoes. In that the young women were not segregated in the barracks, they had a conflict in the commercial store off base... the shoe store employees informed them the store didn't serve "coloreds". All the female soldiers walked out together! They gave their shoe sizes and money to the First Sergeant who went in to buy the shoes.

The soldiers were given the option of firing a rifle at range targets. They were not required to shoot, but if they wanted to, it was ok. The weapon at that time was an M-14 rifle. They did have to disassemble the weapon and re-assemble it so they were familiar with it. When the female soldiers were on the rifle range and had completed their courses of fire, their rifles were taken from them and handed off to male soldier who had to clean them!

On graduating from Basic Training, Private Webb was ordered to Fort Benjamin Harrison to learn military finance. This installation is close to Indianapolis, Indiana. After a few weeks, she had a skill in military finance. Following a short time of leave back in Wyoming, she took a bus to Fort Ord, California.

Life at Fort Ord was alright. She worked at the Finance and Accounting Office. Here she was introduced to the IBM 360 computer and the card files used to make up the data. At this time, (1962) the Viet Nam war was beginning to be engaged by the US military. Our guys were taking over from the French military. Beverly completed her assignment at Fort Ord and was sent on to her next station at Frankfurt, Germany.

Beverly served for the Northern Area Command of the United States Army, Europe. She had computer skills and a solid finance and accounting background. She served there for nearly a year and worked as the accountant for the Commander of the Northern Area. She handled all the funds, receivables, expenses, and the 'ready cash" fund. She recalled paying a bill of $300.00 for gold plated cigarette lighters used by the General as tokens of appreciation for foreign dignitaries.

For a social life, beverly lived in a dormitory room with a female room mate. The building was three stories high. The building's owners had strong requirements of keeping the building clean. Beverly and her room mate pooled their funds and hired a native woman to clean for them. They never failed an inspection.

Pay at the time was $123.00 a month, paid in cash. There was a dining facility. The women did their own washing and ironing. She had some left over each month that she sent back home. The women soldiers working together became good friends,enjoying off time as well.

One of their responsibilities there was to be prepared to get a vehicle and transport the women and children out of the area to the German border in case of conflict. They were not to fight or be in the war zone. Beverly's point of extraction was to the nearest French border.

She took advantage of many historic sites there. She and some of her peer friends used a map to locate sites of the Roman Empire's Roads in the area. Once they knew about where to look, they set out to physically stand on history! In 1963, she helped celebrate Womans Army Corps 20th Anniversary. For their part, they went to the capitol of Germany at Bonn. They went to the Parliament building, and Beethoven's home. A fine benefit for her happened when she developed a keen taste for history.

In May 1964, Beverly Webb, now a Private First Class left the assignment in Germany and had fulfilled her enlistment contract. She went on to get married and have four children. Fourteen years later she joined the Wyoming National Guard. She served ten years with the Field Artillery Unit in Casper, WY. She did all the things every soldier in that unit did including firing the Howitzers!

In 1987, the unit she was assigned to returned to Korea. The unit had been a part of the Korean War. They performed an exercise with the South Korean Military called "Team Spirit". The soldiers were to be shuttled back and forth on buses for the trip to the Demilitarized Zone (DMZ). When the first bus load arrived, the sentries on the North Side saw soldiers dressed in full battle rattle and immediately went to "ready" status. Very quickly, the soldiers were put back on the bus and extracted from the area.

In 1989, she was became a civil service employee with the Wyoming National Guard and moved to Cheyenne, WY. She had expertise in finance and accounting, computer skills, and artillery experiences. She was assigned as a leader in the personnel office for the Wyoming Guard. She later became a part of the Wyoming Guard Facility and Construction office. She worked full time during the week and was a drilling National Guard soldier on weekends. Her work enabled her to continue traveling and serving. She went to Japan and Hawaii.

Beverly went on to become a Sergeant First Class. She earned the Meritorious Service Medal, the Army Commendation Medal, the Army Achievement Medal, the expeditionary medal, the Reserve Forces Medal, NCO Development Ribbon, the National Defense Service Medal and the Good Conduct Medal. She wears the Marksmanship Badge for rifle competence. She considers the highlight of her career happened when she got the opportunity to fire an eight inch Howitzer cannon!

Sergeant First Class Beverly Webb, thanks for doing your best! Thank you for your service!