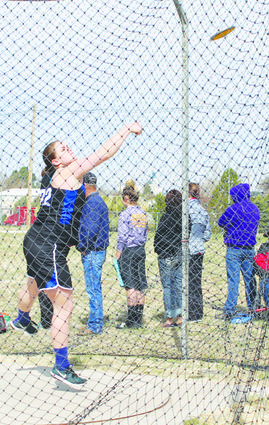 MaKenna Dahlgrin led the Banner County Wildcats this past weekend at the Kimball Invitational.

The Banner County High track team showed they have good potential in the distance events on the track along with the weight events in the girl's division, as this is where they scored most of their points in the Kimball Invitational on Saturday. The Banner County boys finished fifth in the team standings with 32 points and the girls wound up sixth with 35 points.

MaKenna Dahlgrin returns as one of the better weight performers in Western Nebraska and had a good day Saturday finishing runner-up in both the shot and discus, and second only to Alexus Rozelle who set new meet records in both events. Miss Dahlgrin also bettered the previous record in the shot put with her shove of 37'8" to eclipse the old record of 37'2.5". Her second place throw in the discus was 103'0".

Coach Kari Gifford and her staff are working with a very limited number of athletes but are pleased with the work efforts and the attitude of their tracksters at this point.