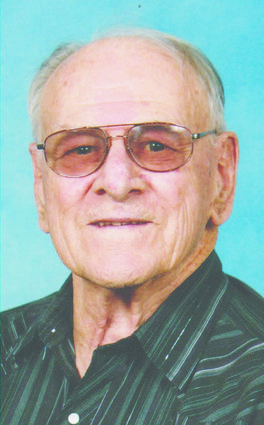 Funeral services will be held at 11:00 A.M., Saturday, April 1st in the Lodgepole United Methodist Church with Rev. David Abbott officiating. Burial with Military Honors will be in the Chappell Cemetery at 1:30 P.M. Friends may stop at the Gehrig-Stitt Chapel on Friday from 1-7:00 P.M. Memorials have been established to the Miller Memorial Care Center in Chappell or the Lodgepole United Methodist Church.

You may view Loyal's Book of Memories, leave condolences, photos and stories at http://www.gehrigstittchapel.com. Gehrig-Stitt Chapel & Cremation Service, LLC is in charge of Loyal's care and funeral arrangements.

Loyal Robert Hornicek, son of Joe and Rose (Seda) Hornicek, was born on June 20, 1928 at their home south of Sunol, NE. He and his family lived on the family farm and he graduated from Sunol High School in 1946, hailing as a star marble player. In 1951, Loyal joined the Army where he served eighteen months in Korea as a mechanic. He came home from the service in 1953 and met the love of his life, Mary Forman of Holbrook, NE. On June 10, 1954 they were united in marriage and in 1955 they purchased a home in Sunol, NE where they lived most of their married life. They were blessed with two children, in 1956 their son Gary was born and in 1959 their daughter Judy was born. In 1956, Loyal began driving school bus for Sunol Schools; he worked for Highland Electric Company and later went to work on the Firth Booth Farm where he worked for thirty years. Loyal also owned his family farm, which eventually grew to one hundred forty-eight acres.

Loyal was a dedicated member of his community, serving on the Sunol School Board and as a Chairman of the Crippled Children's benefit for three years. Loyal joined the Elks Lodge in 1983 and served on the Executive Board for three years and worked the food booth at the fair, the Beer Garden at Octoberfest and helped with the Hoop Shoot for many years in his local lodge. For fifty-three years, he and Mary were faithful members of the Lodgepole United Methodist Church in Lodgepole, where Loyal was Chairman of the finance committee and a Trustee on the church board for three years. Loyal and Mary were members of the Prairie Schooners Square Dance Club for thirty years as Loyal thoroughly enjoyed grabbing Mary's hand and taking her square dancing. Over the thirty years as part of that club, Loyal filled every office in the club. Loyal was amazing with his handiwork and in his later years enjoyed woodworking and small engine repair. There wasn't much he couldn't build, fix, or tinker with.

He is preceded in death by his parents, Joe and Rose Hornicek and sisters, Clara Miles, Grace Cruise and Viola Zimola.