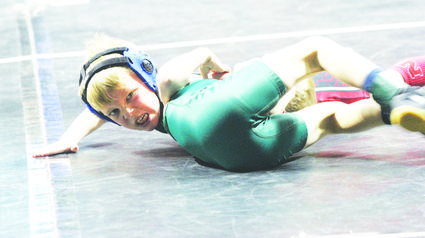 Britton Culek looks to his coach, and dad, as he wrestles his way into the championship at the Nebraska State Folk Style Tournament in Grand Island last weekend. Turn to page B8 for a team photo.

I am sure by now you readers all know that the South Dakota State UniversityJackrabbits lost to number one seed Gonzaga 66-46 to end their season. Our Mike Daum didn't have his best game, but still ended up scoring 17 points against a team that is in the running to win it all. He did a good job against their 7'1" big guy in closing out an awesome season in just his sophomore year of Division One basketball!