Longhorns edged out by Perkins County in Sub-District final 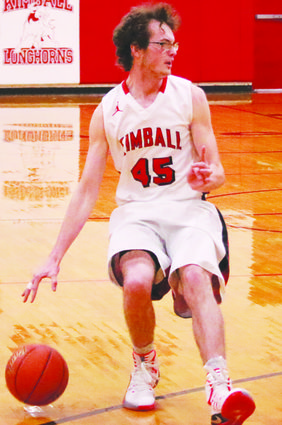 Edward Barnes, led the Longhorns in a successful first quarter during sub-district play this past week. Barnes also led the Longhorns overall in the effort against Bayard, with a total of 12 points to his credit.

The Kimball high boys had a good run at winning the C2-12 Sub-District Basketball championship, but came up 4 points shy in the title game with Perkins County. The Horns started out by winning their semi final contest over Bayard 53-45 before falling to Perkins County 56-52 in the championship game. The Kimball boys completed a winning season of 13-10 under the direction of co-head coaches Gene Mohr and Nick Kuxhausen, assisted by Bruce Tjosvold.

Kimball had good fan support both nights of sub-district play held at Sidney with the semi-final game held on a Tuesday, and the title game postp...