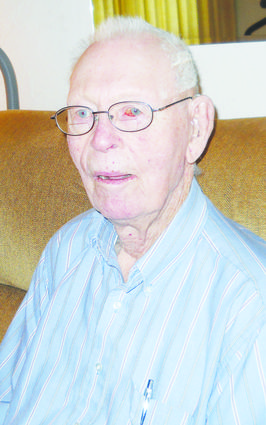 Lee R. Foster had obtained a year of college at the University of Nebraska in the early forties. He recalled that when the bombing at Pearl Harbor was going on, he was waiting tables at the Women's Prison.

His brother received a college scholarship the next year so Lee returned to the family farm while the brother took advantage of the scholarship. In the early part of 1943, Lee and his brother knew one of them was going to have to serve in the Armed Forces.

Lee applied for voluntary induction in York, Nebraska. For the physical exam, he had to go to Fort Crook, Nebraska. Directly from passing the exam, he was on a bus with others. The bus took them to Fort Leavenworth, KS. He and others were held there for about a week, and then moved to Camp Wolters, Texas. This to be was Lee's first train ride.

Camp Wolters was one of the most active infantry training and replacement installations supporting WWII. It's important to know that Audie Murphy, one of the most decorated soldiers of the entire WWII, trained at Camp Wolters, TX. It's about 4 miles northeast of Mineral Wells, TX.

Another first for Lee was arriving at an unusual looking place and having grown men raise their voices at him. The men had invented some new terms and blurred the pronunciation of words.

Lee went the usual path getting his new haircut, finding the mess hall, and walking along a long counter-top while getting clothing and gear. He found out someone would not gently nudge the recruits awake. Lee's favorite part was the drill and ceremonies and running in formation as the unit ran to cadence calls. Lee had been shooting since he was twelve years old. Rifle marksmanship was not that difficult for him.

A situation developed during basic Lee was on Guard Duty. One of his fellow trainees was having difficulty adjusting to it all and tried to escape the Camp. Lee was part of the search party for the man. He was apprehended and returned to training. Very soon after, the man tried fleeing again and for whatever reason, he was shot. The wounds were not lethal, but the whole scenario upset Lee for some time.

Upon graduation from this first part of training, Lee passed some tests that caused him to be switched to the Army Air Corps. He and a few others were sent to bombardier /navigator school at Texas A&M University. (It would be a cultural training jolt to go from basic training to college). As this six month piece of training ended, the recruits were to go to pre-flight school.

New orders were announced. All ground forces were to revert back to the US Army. Re-assignment sent the men, by train, to Fort Bragg, NC where he was assigned to the 100th Division, 7th Army. The soldiers trained here were to be the ones replacing soldiers who had been casualties in the various units of the 7th Army. Training lasted from June to October 1944. In Company M, 3rd Battalion, 99th Regiment, 100th Division, Lee obtained his skills with the heavy weapons and Mortar Company. The company had two platoons of machine guns and one of mortars. A good deal of the training was developing one's body so as to carry the weapons and ammunition.

Soon enough, the Division was sent to New Jersey to load onto troop ships and cross the Atlantic Ocean. En route, the troop ship (The George Washington) encountered high seas and small hurricanes. There was lots of sea-sickness. In late October, the ship landed at Marseilles, France.

The landing is on the Mediterranean side of France. The men had been trained to move right into battle if need be. After a brief rest, the units started moving north. They moved up northeast to the Rhone River Valley to the lower area south of the Vosges Mountains.

Although the information hadn't been put out, a full-strength German 708th Volks-Grenadier Division had established itself here. The fight was on. A part of the German Army also controlled the French Garrison at Lemburg, France. This old, old, well-fortified place was assaulted by the 100th Division and not without severe casualties, overcame the Germans there. Operation Nordwind had begun.

In the worst winter of the 20th Century, the fight was about Allied Forces stopping the last effort of the German Army to move westward. Lee said the fighting was fierce. He could hear the enemy artillery coming in. The 88mm rounds were hitting and raining debris on the men.

There was a house in the area that had been holding reserve forces and ammunition. When enemy fires hit that house, very few survived the attack. There were times when the platoon's men had to carry their weapons up 30 degree slopes to get strategically situated. After a while, the mortars, plates, tripods and ammo gets heavy! During this fighting, Lee sustained an injury when a shrapnel hit him in the left side of his neck.

In the face of snow, ice, rain and mud, these units of the 7th Army were able to rip the Germans out of their trenches and fortifications. The savage fighting was overcome by American perseverance, astounding courage, and good training.

The unit won the Presidential Citation for their work – this is the equivalent of the Distinguished Service Cross for individual valor.

In all, in 185 days of uninterrupted ground combat, out of an authorized strength of 13,688 officers and enlisted men, the 100th Infantry Division sustained 916 killed in action, 3,656 wounded in action, and lost 180 men missing in action. The overwhelming majority of these were sustained by the three infantry regiments, which together were authorized 9,771 men; in other words, considering that the infantry units were rarely maintained above 80% strength, about 50% of all the infantrymen in the Division became casualties in the course of achieving the Division's magnificent record. (From: http://www.100thww2.org).

From December to March 1945, Operation Nordwind was being fought at about the same time as the Battle of the Bulge. Both Battles were extremely costly.

As the fighting subsided, Lee and his fellow survivors helped with the wounded by administering first aid, keeping the injured warm and encouraged, and loading them on about any moving vehicle headed out of the area.

In about 6 weeks, the Nazi surrender was accepted. The first to get into the fight were the first to go back to the States. Lee would have to remain in Germany for about another nine months.

He pulled check-point duty, checking the identification of persons returning to their homes near Stuttgart. Some of the people coming through his area were from Concentration Camps.

In their off time, the men played basketball, did some area traveling, and wrote letters home by V-mail. In July 1945, the men were told to get prepared for another movement, to Japan. They wanted to end that war too. In August, after VJ Day, that preparation was called off.

Lee was re-assigned to a finance office in Reams, France. He worked in a retained accounts branch for the European Theater. Lee is uncertain how he was picked for this job, but it was a good one for him. He was a Private First Class who was in charge of about 15 people who had been prisoners of war – German prisoners. Many were Doctors, lawyers, and businessmen. For his work, the Army suggested that Lee take a discharge there so they could hire him back as a civilian. He turned the offer down because he wanted to return home and get into college.

Lee earned the Combat Infantry Badge, the Bronze Star, the Purple Heart, the War's campaign Medals, the Army of Occupation Ribbon, and the Victory Medal. Much of the Unit's actions are in a book called "The Story of the Century".

Lee finished college and eventually arrived to Gurley, NE. He managed the grain elevator for that community. He was also involved in other things. And at one point, he was the grain elevator manager, the Mayor, the Fire Chief, and father of four kids.

Private First Class Lee Foster, I'm grateful Lee finished college and eventually arrived to Gurley, NE. He managed the grain elevator for that community. He was also involved in other things. And at one point, he was the grain elevator manager, the Mayor, the Fire Chief, and father of four kids.