Friends and Neighbors: Wayne Robbins Family; Friends of the KVFD 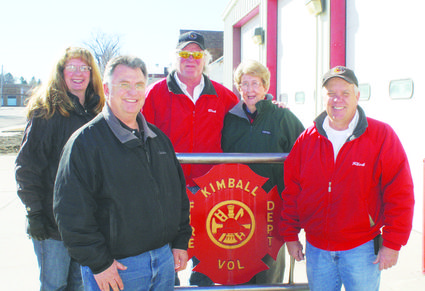 This photo was taken to commemorate the demolition of what will soon be the KVFD parking lot. From left, Susan Haack and Dave Haack of Z&S Construction with KVFD's Bob Nagel, Z&S's Flo Robbins and KVFD's Rick Wynne. Not pictured, Chris Haack.

The Wayne Robbins family and subsequently Z&S Construction have been generous donators and supporters of the Kimball Volunteer Fire Department for generations. Three to be exact.

Wayne Robbins became an honorary fireman in the early 1980s and enjoyed gifting new American flags to the department along with other donations. Now his wife Flo, daughter Susan and son-in-law Dave Haack and family have continued with the tradition of supporting the fire department. Among the family's unselfish donations of the past included a donation towards remodeling the firehall's kitchen.