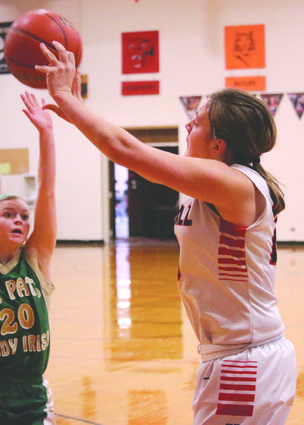 Alexis Lulf shoots one of many three point baskets during a game last week against North Platte St. Pats.

Kimball High senior, Alexis Lulf, set a new school record for 3 point field goals in a game with eight as she scored 28 points and led the Lady Longhorns to a 71-57 win over Bayard this past Monday night. The way Lulf was lighting up the score board, it was like viewing the strip in Las Vegas!

Kimball's long shot artist nailed her first trey in the opening quarter, added four more in the second period, and closed out the night with three more in the final period. She eclipsed Danielle Perry and Alex Reader. Perry hit six twice in her career. Lulf has now tallied 32 treys on the season, whic...