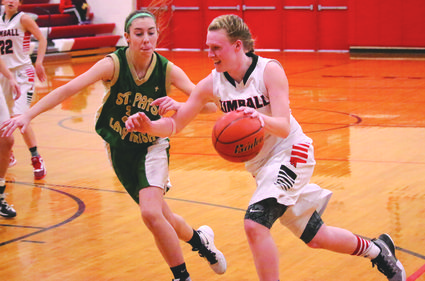 Jannel Fiehtner drives to the basket against a St. Pats defender last week.

Coach Chauncey Pedersen got some good play out of his Kimball High Lady Longhorns over the weekend, but no enough to register a win as the Kimball ladies suffered losses to Sutherland on the road Friday night, and to North Platte St. Pats at home Saturday. The Lady Horns are now 4-9 on the season that is fast drawing to a close.

Kimball had a solid first half of play at Sutherland, leading 27-23 at intermission, but was outscored 18-1 in the third period to seal their doom as the host school won out 48-37. Kimball came back to out score Sutherland by two points in the final period, but it was too little, too late.

Kate Reader tallied her season average in leading her team with 14 points on 5/12 shooting from the field and 4/6 at the foul line. She was also top rebounder with ten for a double-double, had two blocks, three steals and six turnovers.

Coach Pedersen said, "We had a real good effort the first half but then fell apart the third quarter. We don't have the depth of some of our opponents."

North Platte St. Pats came to town sporting a 15-1 record with their lone loss to Kearney Catholic. They went home with 16 wins to their credit, but they had to battle hard as Kimball gave great effort to score 54 points in the 69-54 loss. To their credit, they did this with their leading scorer, Kate Reader, on the bench most all of the first half after getting her third foul just two and a half minutes into the game. She sat out the balance of the first half.

After falling behind 23-9 at the quarter break, Kimball out scored the Irish 16-13 in the second period to close to 36-25. Senior Alexis Lulf got her 3-ball working and hit three treys in this time frame and Hannah Biesecker added a trey and a pair of free throws. The Lady Horns continued to play hard the second half and ended up with nine treys on the evening as Fiehtner hit two in the second half, Wurdeman add one and Lulf nailed her fourth on the contest.

Coach Pedersen said, "That's more like it." He was completely satisfied with the way his girls played, especially with Reader sitting out so much.

The winners had five three-pointers, and were 14/21 at the line with 21 fouls. They were led in scoring by sophomore Hayley Homan with 26 points, Riley Nitsch with 13, and Kaleigh Kummer with 12. The Lady Irish were ranked number three in the State Class C-2 rankings by the Omaha World Herald this week.

The Kimball girls were to travel to Gordon-Rushville tonight (Thursday) for first round play in the Western Trails Conference Tournament with the winner advancing to semi final play at Cougar Palace tomorrow (Friday) night.