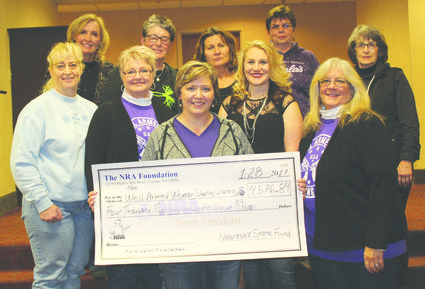 Members of the Gering Chapter of The Well Armed Woman pose with a check received from the NRA during the NRA banquet on Saturday, Jan. 28 in Scottsbluff. The check represents nearly $5,000 in grant money for the local woman's shooting group.

The Well Armed Woman Shooting Chapters, founded in Arizona in 2013 by Carrie Lightfoot, were started for women who want to learn about firearms in a non-intimidating environment and meet women of like-minded interests who are at least 21 years of age and legally able to possess a gun.

The Gering Chapter, started in August 2015 by Renee Thomas (NRA and TWAW Certified Instructor), has been an inviting and educational resource to more than 20 women on a monthly basis.

The Gering Chapter meets the last Saturday of every month at the Sure Shot Gun Range at 2pm, where the topics of discussion cha...