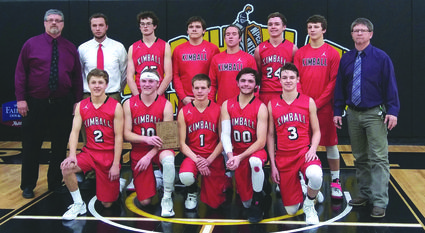 The Kimball High boys played themselves proud in finishing second in the SPVA Conference Basketball Tournament held this past week. After a first round win over Chase County in a game played on Kimball's home court, with the Horns winning 64-56 in overtime, Kimball then won 55-49 over Perkins County in a semi final contest. With the two victories, the Horns then advanced to the championship game with Hershey and suffered their lone loss in tournament play with the Panthers winning out 55-49. The Big Red brought home the runner-up plaque to go in the Longhorn trophy case.