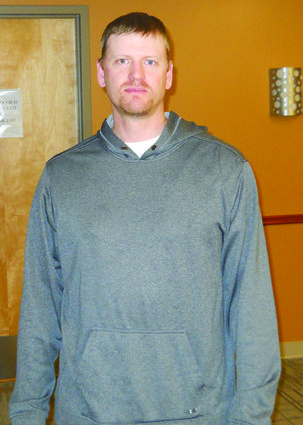 Thomas Potton, "Tom" grew up in a family of people with strong military backgrounds. He also loved to fly and had his private pilot's license by the time he was 17 yrs old. He lived in Alaska since 1982. His father was a commercial pilot and a missionary pilot. Tom, being home schooled, worked on his studies early then went over to the airport hangar to work on planes and learned to fly. The missionary work involved flying in humanitarian aid items to the small villages in hard to get to places.

On graduating from high school, he was very aware that he needed a college degree and that he wanted to be in the US Air Force flying planes. As his life went along, Tom married a woman who had teaching credentials. They moved to Barrow, Alaska. The income there was very good but the quality of life issues were tough. An opening in a school on the Kenai Peninsula came about so his wife transferred there and they moved. Tom could continue his college studies in Anchorage. He graduated with a college degree in Aviation Technology.

Tom had been working with a local Air Force recruiter in Alaska who facilitated Tom getting into this branch of service as an Officer. He was headed to Maxwell Air Force Base, Alabama (near Montgomery, AL). He wore street clothes and a warm jacket. On arrival at the new environs, the weather was hot and it was the middle of the night. The new people were placed into temporary rooms for a bit of rest, then at 0400, the alarms went off. People were yelling at the new ones, telling them to get out of the sack, get dressed, get in line... "Yeah, I'm in charge, you're not!"

All this behavior came as somewhat of a shock to Tom, as he was 26 yrs. old, a family man, and not at all used to it. One of the biggest helpers for all the new people were a couple of enlisted airmen who had been accepted into this officer's school. They talked through hard spots for them, showed them what to do when information was scarce, and ensured success for the newbies. One item of education was the way clothes were to be folded and displayed. Now, after 13 years, Tom continues to have two pair of issue socks and two fitness t-shirts all folded and pressed for eternity.

After three months of Officer Training School, (OTS) Tom and the other classmates took a meal in a restaurant with their Supervising Tactical Officer. So...here they are, making nice to an individual who has been not exactly nice to them. At any rate, he had the gold colored bar on his uniform. He was a 2nd Lieutenant in the Air Force. He is also among the most saluting individuals in the entire service. More training was on the way. He was sent to Naval Air Station, Pensacola, Florida. This was Aviation Primary Instruction or API. Tom was introduced to flying a fast, aerobatic jet trainer (T38) which was quite different than the single engine bush planes he was used to. He loved it. He thought that since he graduated from OTS he was finished being yelled at... the training pilot sitting in the back seat of the jet was also a Marine who provided his share of colorful descriptions about how to fly an airplane.

This training was interrupted by Hurricane Ivan. Although most of the aircraft were flown out off the base, the real property and network of roads sustained major damage. The students were told "to go see the country, don't get in trouble, we'll be in touch." In a few weeks, he was back in training. Upon completing, he was next sent on to Vance AFB, near Enid, OK.

Choices offered newer pilots are two. The aircraft you choose to fly will be used as one engaging in one of two categories. Aircraft that transport things (people, weapons systems, vehicles, food, fuel, etc) or combat. The pilot's focus can't be on both tracts. Tom chose combat. Due to the nature of the selection, differences come about. Different training, different preparation, and different clothing – including the flight suit.

Tom described the flight suit as being one capable of applying pressure to the lower extremities so that the blood is moved to the chest and head. More blood to the head means better brain control. It allows one to tolerate higher "Gs". Higher "Gs" equals capably flying at higher altitudes and speeds so the pilot doesn't black out.

Tom's combat aircraft of choice was the B-29. He's a trained pilot and now it was time to learn about this particular plane and be ready to transfer to another base. (Lesson: don't unpack for lengthy stays!)

Minot AFB, North Dakota was the next site for this piece of training on the B-29. There isn't much else going on in that part of the Country but prepare to fly, fly, repeat. Some of the bombing ranges were in Utah, Nevada and in Canada. Flights were also in conjunction with other branches where they would provide a show of force and professional training. There was a huge amount of training. One cannot just on-again, off-again jump into the cockpit of any combat plane and be ready to fly it. It takes work and more work. Flights go halfway around the world and back!

Tom, his faithful wife and three kids got more than enough opportunities to see different places in the Country. Their horizons were expanded from having lived on the Kenai Peninsula in Alaska! Tom took much from the military service... focusing, prioritizing, work-arounds, perseverance and serving. The Country and Tom grew as a result. It was time to try different options in life that would accommodate he and his family. After leaving the US Air Force, they re-settled in Alaska.

Captain Tom Potten, you served your Country well and honorably! Thank you for that service!