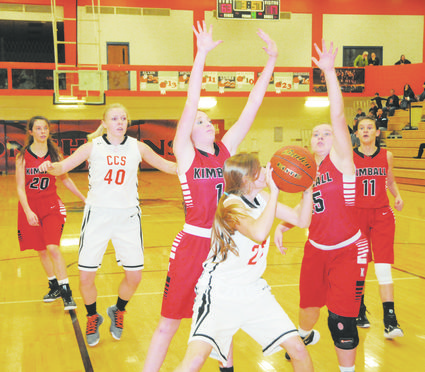 Madison Wynne and Carli Wurdeman block the Chase County Longhorn while Kaylynn Nelson and Hannah Biesecker hang back in case the ball gets past their fellow teammates.

The loss of their leading scorer certainly played a part in a pair of losses this past week for the Kimball High Lady Longhorns. Alex Reader suffered what appears to be a season ending knee injury in the closing seconds of play at Morrill in the final game before the Christmas break, and was scheduled to confer with a surgeon this past Monday. With the talented junior sharp shooter side-lined, the Kimball girls fell to Sidney 65-25, and lost to Chase County 71-22 this past week.

Thanks to a four-point play by Hannah Biesecker, Kimball trailed Sidney 14-6 at the quarter break on Thursday evening, and were down 25-11 at half time before the Lady Raiders outscored the hosts 40 to 14 in the second half to surge to the win. The Class B Sidney club has a load of talent and lots of depth as they continually ran in a new set of five players with no loss of talent. It would appear the Sidney club is a team that could go far this season

Without her sister, sophomore Kate Reader was limited in what she could do, but still led Kimball scoring with 11 points on 4/6 shooting from the field and ¾ foul shooting. She was also Kimball's top rebounder with six. Alexis Lulf had five point with one trey, Hannah Biesecker had four with one trey, Justine Heeg 3 with her trey and Carli Wurdeman had two.

Kimball was 8/30 from the field going 3/12 on three point attempts and were a solid 6/7 at the foul line. They pulled 23 rebounds with Reader and Jannel Fiehtner both charting six boards. The team also charted seven steals, only two assists, and 32 turnovers along with 12 personal fouls.

Sidney not only has a lot of talent and depth, but they have young talent and depth. They were led in scoring by Kelsey Knight with 17, Janay Brauer 14, and Annalise Lecher with nine.

At Imperial on Saturday, the Lady Longhorns were up against another very talented Chase County team and simply could not match up. Kimball shot 8/41 from the field for 20 percent going 2/11 on three-point tries and were 4/10 at the line. The Lady Horns managed only 12 rebounds, led by Fiehtner and Reader with three each. Reader had two of Kimball's four blocks, and Reader and Biesecker both charted three of Kimball's 12 steals. Kimball also had 24 turnovers.

No one in double figures for Kimball with Fiehtner high with seven points. Lulf hit two treys and had six points, Wurdeman four, Biesecker and Reader two each and Heeg one. Chase County had 13 players score led by Mallie Menair with 13.

The two losses the past week leaves the Kimball girls with a 3-3 record and a busy week this week. This past Tuesday they were to host a good Potter-Dix club, then have road games over the weekend with trips to Bridgeport on Friday and Gordon on Saturday.