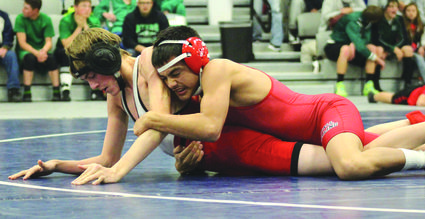 Jordan Cluff, takes control of an opponent during a wrestling meet earlier this season. Cluff was a double winner for the Longhorn club against Hershey and Chase County just prior to the Christmas break. The Longhorns will be back in action on the Mitchell mats for Western Trails Conference tournament play today (Thursday) and again this Saturday at the Garden County Invitational.

The Kimball High wrestling team hosted Hershey and Chase County in a double dual wrestling match to close out the pre-Christmas part of the season with Jordan Cluff, a double winner for the home team.

Kimball went up against Hershey in their first dual of the night and lost 51-30, but actually won three of the five matches that took place as the two teams did not match up in most of the weight classes. Trevor Ryschon at 126 won by fall...