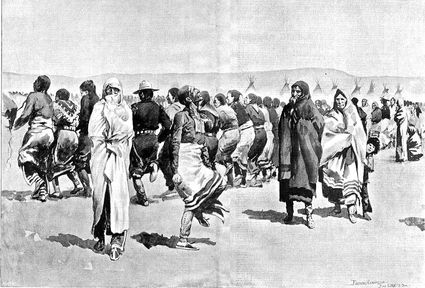 The Ghost Dance by the Oglala Lakota at Pine Ridge. Illustration by Frederic Remington 1890, published in Harpers Weekly.

"My uncles," the young boy pleaded with hands raised above his head, "do not kill me. I do not wish to die."

Crow Foot, the 14-year old son of Chief Sitting Bull, had been in hiding inside his father's cabin as the skirmish between the Indian Police and Sitting Bull's followers escalated. Nearly a dozen men lay dead or dying on the frozen ground outside the cabin. Among the dead was Sitting Bull who had been shot in the chest and head at the beginning of the skirmish. Many of the Indian police had counted coup on his body and others had begun to mutilate the corpse.

The Indian police were b...