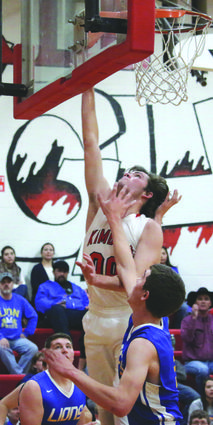 Jordan Greenwood makes one of many shots during the Kimball invite.

The Kimball High boys got the basketball season off to a great start by winning their own four-school Kimball Invitational Tournament. The Longhorns ran past Morrill 71-39 in their first round pairing and then held off Dundy County-Stratton 77-74 in a thrilling championship game victory.

Kimball got off to a slow start in the Morrill contest and trailed 9-2 early before Jordan Greenwood got the lid off the basket and the shots started falling while they were rimming out early despite Kimball getting the good shots they wanted. Greenwood scored 7 straight points and had 9 at the quarter break as the Horns surged to a 22-11 first period lead. In the second period they had a time when shots were not dropping, but at no time were they not in control as they out scored the small and young, but scrappy, Morrill club 18-6 to take a 40-17 half time lead. The Kimball coaches were using a lot of players with steady substitution and the Horns responded with great team play and unselfish distribution of the basketball.

The final stats showed complete domination by the winners as they shot 79% from the field hitting on 27 of 34 field goal attempts including 4/6 on 3 point attempts, and 13/17 from the foul line. They out rebounded the opponents 37 to 21, had 18 steals, 12 assists and only 12 turnovers along with 12 personal fouls.

Greewood led Kimball scoring with 20 points with 1 trey. Brandon Barker had 15 points on a perfect night of shooting going 5/5 from the field and 5/5 at the line. Jaden Withrow had 8 with 2 tries, Izaac Reuter 6, Colton Mielke 6, Zane Anthony 7, Kole Bush 5, and Grant Hickman 4. Reuter was top rebounder with 6 while Barker, Withrow, and Bush all charted 5 each, Greewood and Mielke both with 4. Greenwood and Barker had 5 steals each and Corey Travis was tops in assists with 5.

Morrill was led in scoring by Robb Keaton with 15 and Tanner Whetham with 10.

Kimball coaches praised their team with good effort the entire contest and for playing hard.

The 77-74 win by the Horns over Dundy County Stratton was a great championship game and one the Kimball Team and their fans can put in their memory bank. It was hard fought from start to finish like a title game should be with an unbelievable and climatic finish.

Both teams came ready to play and it was a fast-paced, running contest with both clubs playing pressure defense. Kimball got off to a strong start and Kimball coaches credited the first quarter play as the key role to the victory as the home town club was up 24-12 at the end of the first period, thanks in large part to the 9 points by Brandon Barker and 8 by Jordan Greenwood.

The Horns were strong at the foul line all night and had connected on 19 of 22 foul shots by half-time helping them to hold onto a 46-36 margin at intermission. It was an awesome half of high school basketball and the second half brought more of the same. The 3rd quarter belonged to the DCS club as they out scored Kimball 21-11 to tie the contest at 57-57 entering the final quarter of play. Dundy County actually took a 57-55 lead just before the quarter ended but Barker knotted it by hitting a pair of free throws.

Jaden Withrow hit on 3 free throws and Greenwood made a move inside to score to put Kimball back up 62-57 to start the fourth quarter. Kimball lost the services of sophomore Izaac Reuter who fouled out with 6:24 remaining. Greenwood was playing a key role in keeping pace with the opponent scoring until he picked up his fifth foul with 1:37 to play and Kimball leading 68-66. DCS took the lead but Jaden Withrow tied it up with a pair of free throws, and then gave the horns back the lead with a fast-break basket. With 12 seconds to play Brandon Barker went to the line and calmly made 2 free throws to put Kimball up 74-71. With 2.4 seconds showing on the clock, 6'3" center Noah Kerchal hit a trey from the corner to tie the game at 74-74. During a down-to-business time out, Kimball coach Bruce Tjosvold drew up an in-bounds play for the Horns that called for a long pass down court from Colton Mielke to a streaking Jaden Withrow, and IT WORKED! The pass was a bit short, perhaps, but Withrow made the catch and from 3 steps behind the 3 point arc fired up the long, and on- target shot that swished through the net with time expired on the clock and the place came unglued as the Kimball team, coaches, students, and fans celebrated. It will go down in the memory books as one of the most exciting wins ever in Kimball High basketball history.

A huge night for Jordan Greenwood who led all scorers with 32 points including 2 treys and 12/14 foul shooting. A huge night for Jaden Withrow with his 21 points, the winning 3 point bucket, 12/15 foul shooting, and a team high 11 rebounds as he put on an exhibition of vertical leaps to bring down rebound after rebound. A huge night for Brandon Barker who tallied 17 points and was 9/11 at the foul line including those late pressure packed free throws with the game on the line. These three seniors did most of the scoring with sophomore Zane Anthony charting 6 points including a trey and junior Kole Bush hitting a free throw, but the seniors, and the coaches, were quick to point out the play of the younger players and the role they played in the big win. It was certainly a team effort.

Coach Gene Mohr said, "The kids played hard all night, kept their poise and did what they needed to do to win the game. Coach Tjosvold drew up a great play at the end to help us get the win without going into overtime. I thought our young kids really played well and I feel we are ahead of where I thought we might be this early. If we can continue to improve like we should, this could be a fun year." Coach Nick Kuxhausen echoed most of what Coach Mohr said and also praised the team play, and the play of the young players to go with the great play of the seniors.

Brandon Barker puts a shot up against Morrill during the Kimball Invite. Barker had a perfect night for shooting.

It was a night of foul shooting as Dundy County was 17/33 at the line and had 34 fouls whistled on them compared to 25 against the Horns. They out rebounded Kimball 37 to 26. Phalen had 29 points for DCS and Kerchal 18 with 9 players getting into the scoring act for the Tigers.

Kimball will take their 2-0 record into the weekend hosting Perkins County Friday night with game times at 4 and 7 p.m. The Grant club won big over Wrey, Colorado this past weekend 51-16. Saturday night they travel to Morrill to face the young and scrappy Lion team with game times at 3:30 and 6:30 for the boys.