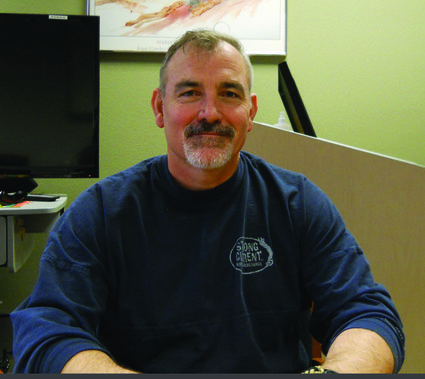 From his early childhood, Daniel Rouse (Dan) wanted to be a soldier. During elementary school classes, the question to the students was: "what do you want to be when you grow up?" Most of the kids' answers were about being teachers, policemen, firemen, astronauts, etc. Dan's was consistently "soldier".

On graduating from high school, many of his friends wanted to go into the Iowa National Guard. In that it was a good way to pay for college, he joined. Dan passed all the requirements of enlistment and headed for Fort Dix, New Jersey to get the basics of the US Army. There was nothing this young soldier-in-training couldn't handle as Initial Entry Training (IET) went on. He grew up in Iowa on a farm so the challenges were easily met. He did get to know the Drill Sgt well and remembers the flat stiff brim of the Drill Sgt's hat seemed to catch the bridge of his nose often.

After the usual eight weeks of training, Dan was immediately bussed to Fort Lee, VA. Here he got advanced training in logistics supply.

Upon graduation from this course, he returned to Iowa so he could continue his college education. He enrolled in ROTC as well. In ROTC, Dan would learn the fundamentals of being an Officer in the US Army. By coupling that with his IET and AIT time, he was well prepared to go on the next level.

His recruiter advised him that the only thing available to him was a position in the US Army Reserve. Since he had a college degree in the finance field, Dan thought it was wise to move to the Washington DC area to establish a career and see what might be available for Active Duty in the Army.

Dan made friends and contacts while in Washington DC. He had several items going for him and obtaining influential friends was certainly a plus. After about two years of planning and networking, things began to work for him. Many times, a person doesn't move through channels of influence. His packet of information is what moves. The packet has all the information available about the subject. Dan's packet was expedited and finally fell onto the desk of a testy Colonel. Dan quickly found himself on Active Duty and in Ranger School!

After a grueling piece of training at Fort Benning, GA, Dan became a US Army Ranger. He was then sent on the Fort Lewis and into a unit that was commanded by an Army Ranger. All positions of leadership were filled by the same. Perfect! Performance here was electric! Everything this unit did was way over the top in expectation and excellence.

Dan was sent on to Basic Officer Infantry Course from there. He finished near the top of his class and was offered his choice of units for the next assignment. He chose the fabled 101st Infantry Division (Screaming Eagles) at Fort Campbell, KY. A Captain now, he was appointed a Company Commander in an infantry unit there.

In July 1999, a soldier assigned to this same Company suffered mightily from social interactions that happened off-base and ultimately on-base. Sadly, one soldier killed another soldier. The incident was fueled by alcohol, emotion, and opportunity. Without going into the personal aspects of this case, it was not something that Dan had nor could have prepared for.

The event happened in the early morning hours of that particular day. Dan was called to the crime scene. His first daughter Sofia had just been born. She was released from the ICU area of the neo-natal unit at the local hospital and was home for her first night. Going to the base was not particularly something he wanted to do.

He now had the Criminal Investigation Division, the base MP's, his immediate Command, his Chain of Command, and a load of media people who could not wait to bring disrepute on the US Army/US military in his immediate area. A time-in-command that would have lasted two years continued on for about eighteen months longer. Finally, the matter was resolved with the assailant being sentenced to life in prison for murder.

The incident became a significant item in the "Don't ask, Don't Tell" policy of the US military at the time. It was a national news story.

As the investigation went on and on, the Company's work and training did not necessarily stop. They still had missions to accomplish and preparations to make for the next deployment. The subordinate leaders took hold while CPT Rouse was other-wise occupied. They excelled in every aspect and gelled as a superior unit!

Dan's Command time with the 101st was coming to an end. He transferred to Central Identification Laboratory in Hawaii. The actual office was the JTFFA (Joint Task Force Full Accountability). This is the Department of Defense office of investigating and recovery of Missing In Action personnel. The geography scope was world-wide, in every continent. It went back into history from WWI, WWII, Korea, Viet Nam and other actions other than war. Dan did all the planning for missions to recover remains of any military personnel from the above mentioned wars. In that he was an infantry Officer, he was chosen to lead the odd recoveries. The ones he remembered most were in Laos and Tibet.

In 2001, our Country was struck by Islamic terrorists. The US military quickly responded by getting the right people in the right positions "asap". Dan left the JTF and was sent to Army Central Command in Kuwait (ARCENT). It could have been a great assignment except for the person in the leadership role. This particular person was inept in several different facets.

While Dan, now a Major, was at ARCENT, his main tasking was to deal with the interchange of units in the fighting in Iraq. He was to see that the units and their equipment coming out of Iraq while their replacements and equipment were going into the country. There had to be a "right-seat-ride" handoff time and then the new units had to continue the missions. The work was a 24 hour a day, 7 days a week. MAJ Rouse had a cot set up in the operations center so he was situationally alert to everything going on. He served a year in this role.

On being re-deployed, he went to Command and General Staff College at Fort Leavenworth, KS. This educational piece prepares those selected to attend for higher command. After graduating, his next assignment was to Fort Bliss, TX. Arriving on this place and looking around, one has to wonder what he/she might have done to deserve this posting! Here, Dan was the Operations Officer for a unit that had impressive weapons capability and training. It was considered a first strike element within a year. And, after a year, the unit (2/12 Cavalry) was deployed to Iraq and specifically to the Baghdad area.

At the Base of operations, there was a problem. Every patrol unit that left the base was struck by enemy combatant units. Every unit. Men were injured or killed, equipment was destroyed. There had to be a different way to take the fight to the enemy. At this time, the US Command decided that the Iraqi Army would be the lead element in going on patrols.

There was still a problem getting out and away from the base. A nearby road existed. It had been viciously attacked by enemy forces before, but since the allied forces abandoned it, n ot much was happening there. Unit commanders and operational elements asked the Operations Officer to open up that road and approve combat patrols to travel it.

After cafeful thought and consideration, Dan approved use of the route. About 300 to 400 yards on the paved road, a buried IED blew up the convoy. With the advanced technology of surveillance cameras, Dan and the Tactical Operations Center watched what happened. There were several Killed In Action. The quick response element was dispatched and the scene secured. In moving on, the soldiers found quite a bit of Al Quaida encampments and torture chambers.

Dan did have the opportunity to run with General David Petreus during his morning physical fitness regimin. Petreus was the military Commander of Iraq and Afghanistan for the Department of Defense. Running with him was a fairly cool thing to be part of.

After eighteen months, Dan re-deployed to the US and back to Fort Bliss, TX. He was happy to be back with his wife and young family. It was also time to rotate to a new military base. Dan was chosen as the Director of Operations of Joint Personnel Accountability Command, the higher level of work in Hawaii where he previously served. The work involved more travel and recovery missions.

After serving twenty years of service, encompassing the globe, in the best and worse situations, Dan took the opportunity to retire.

A man who wanted to be a soldier nearly all his life, LTC Dan Rouse fulfilled that commitment and then some! Thank you for your service!