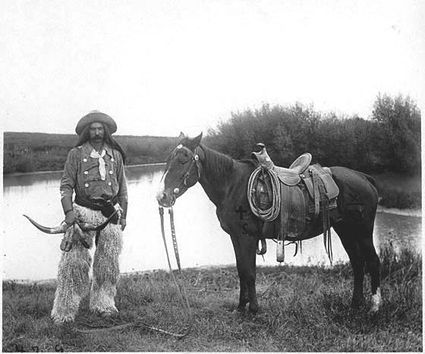 Ned Dunlap by Solomon Butcher, and the Nebraska Farmer article.

Ned Dunlap marched in the 1902 Old Settler's Day Parade in Kearney, Nebraska. Decked out in Angora chaps, bibbed shirt, silk neck scarf and appropriate wide brimmed hat. Ned bobbed his horse's tail and stuck the long hair under his hat, pulled bovine hooves up into his shirtsleeves, attached a set of longhorns to his head and marched in the parade as Kearney's only real 'cow / boy', and Solomon D. Butcher, like so many other hundreds of times, captured the moment for history.

Although Ned Dunlap was quite likely a real Nebraska cowboy in his earlier years, 1902 found him to be the foreman o...