By Don Ogle for the Western Nebraska Observer 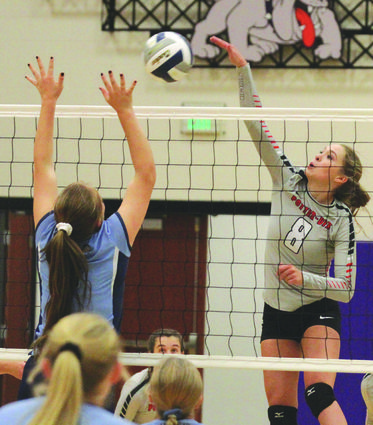 Potter-Dix senior Dawson Sharman, #8, slams one over the net during a recent game against the Banner County Lady Wildcats. Sharman led the Lady Coyotes at the Class D2 State Competition on Thursday, Nov. 10. Despite a stellar season, the Potter-Dix girls were shut out in the first round when Chambers/Wheeler Central won in three straight sets.

Potter-Dix went into the Nebraska State Volleyball Tournament last week on a roll and with high hopes for a good showing.

The Lady Coyotes entered the tournament with a 32-1 record and the third seed in the Class D2 bracket, having controlled their competition at each turn since the second match of the season.

But Chambers/Wheeler Central (WCW), behind the powerful one-two punch of seniors Jacie Laetsch and Regan Dierks, set the Lady Coyotes back on their heals, while unusual plays went against them.

"Obviously, we had a good season," said Potter-Dix Coach Sarah Dvorak following the loss. "It was kind of a bummer we didn't get through the first round."

Dvorak said the Lady Coyotes were competitive in each set, "but we just couldn't put them away."

She described balls taking not-normal paths after hitting the net as one of the unusual challenges, but said her team fought hard.

For Potter-Dix's part, the Lady Coyotes had a hard time getting consistently into their own powerful offense, logging 23 kills as a team. Dawson Sharman led Potter-Dix with eight kills followed by Trinity Langley with six, Audrey Juelfs with five and four from Alexus Roxelle.

The Lady Coyotes were kept busy on the other side of the net, with Sharman and Juelfs getting 15 digs each and Rozelle 13.