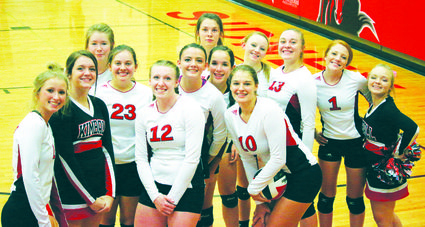 The Lady Longhorns 2016 varsity season ended with 11 wins and 21 losses. It may have been a disappointing season in comparison to the previous year's record of 17-10 but they did prove that they could work together as a team despite changing from a 6-2 format to 5-1 mid-season.

Junior Hannah Biesecker led the Lady Horns in all around stats both offensively and defensively. This season she served up 45 aces, only 10 less than her older sister who served 55 the previous year as a senior, and is now playing college ball in Beatrice.

Seniors Raelynn Hinton and Jannel Fiehtner served up 35 and...