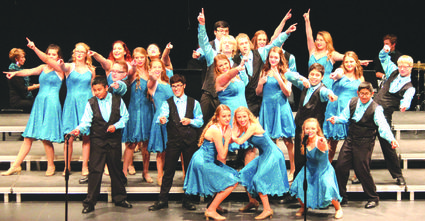 Generally held in Scottsbluff, the competition was moved to Alliance due to construction at the Scottbluff High School.

New Dimension, under the direction of Jacob Hoffman, began with "Can't Stop the Beat" with solos from Nicholas Thomas-Lewis and Kiersten Anderson.

Leisha Casimiro followed up with a solo during the second set, "Bring Him Home," during which she sang the entry into the song, and again towards the end.

The crowd favorite seemed to be the third set...