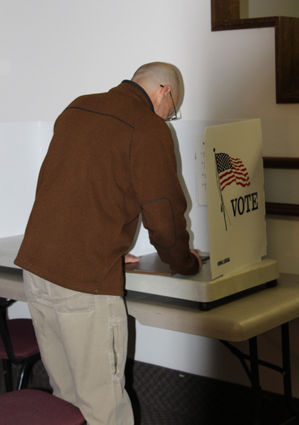 Residents throughout Kimball County descended on the Kimball Event Center on Tuesday, Nov. 8 to vote in the 2016 General Election.

With a total 1,672 ballots cast in Kimball County, the 2016 preliminary results are in.

On the Presidential Ticket, Donald J. Trump/Michael Pence took Nebraska and won Kimball County with a total of 79.48 percent.

Timothy Nolting will continue serving as a Kimball County Commissioner.

The Kimball Board of Education members, Clint Cornils, Heather Norberg, Carrie Tabor and Lynn Vogel will continue serving on that board. Norberg and Tabor were both appointed board members to fill vacancies during a previous term.

Bryan R. Herboldsheimer, Donna Juelfs, and Royce McConnell will serve on the Potter-Dix School Board. McConnell was a write-in with a total of 51 votes.

A close race for the Kimball City Council replaced John Morrison with Kim Baliman and retained James Shields on that board. Baliman received 34.11 percent of the vote with Shields tallying 33.99 and Morrison coming close with 31.49 percent.

Bushnell Viallge Board members are Cody Halligan in the lead with 29.56 percent of the vote, followed by Karl D. Szobody with 28.3 and Verne Hackbarth with 22.64.

Gail Dunkle received 50 votes for the Village of Dix Board followed closely by Linda Rasmussen with 19.6 and Maida Gotfrey edged Dave Parshall out 18.8 to 18.4.

The Kimball County Agricultural Society asked for an excess levy to support their work, but the vote was not in their favor, as 56.81 percent of the votes were against that support.