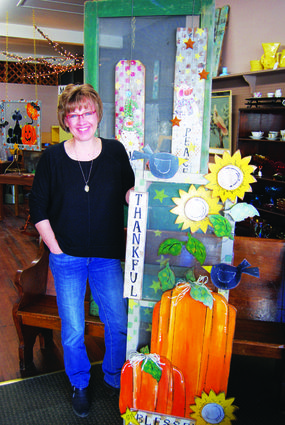 When walking down main street, many people complain that there isn't much of a retail presence in Kimball, and yet Amy and Terry Sorensen have been quietly operating a store front for more than twenty years. Over the years they've sold everything from refurnished antique furniture to original and unique crafts. Today their shop is filled with antiques, refinished furnishings and unique crafts made by the couple.

Amy (Schwindt) Sorensen was born in Kimball and graduated from Kimball High School before heading to the National American University in Rapid City to study fashion merchandising after graduation. During that short few years in Rapid City, two important milestones came into her life; she began working for Maurices and she met Terry Sorensen.

Terry was attending the college of business as well and they quickly became a couple. In 1982 they were married, moved to Montana and Amy worked in Plentywood, Mont. for a woman with a clothing store for a short time. Not too long later, Amy heard of an new Maurices opening in Williston. She interviewed and landed the manager position, helping open the new business for Maurices.

After several years as manager in Williston, Amy was offered the opportunity to transfer to Eureka, Calif., where she again helped open and manage a new Maurices. It was in California that both of Amy and Terry's children were born. Zack, now 29 and Kaitlyn, now 26, both graduated from Kimball High School and are living in Portland, Oregon.

After moving back to Kimball in 1994 they started making and selling their items at craft shows, at first working out of the garage of their home. Amy was a stay-at-home mom, working on crafts while the children were at school. During the day Terry worked for Brighton Equipment and in the evenings he would cut the wood for their projects.

Eventually it became too cold to work late at night in the unheated garage, so in 1997 they rented the back half of a storefront on Chestnut Street just to have a larger, and heated, space to work in. They purchased the building that now houses A Little Bit Country in 1998.

When they were not attending craft shows, they would display their product in the front window of the building. As people's interest in their crafts grew, so did their business.

Although their original intention was never to have a store, their crafts were so wildly popular their business eventually evolved into a retail shop.

As their hometown retail market grew they also transformed their production and grew from single craft shows to selling at Nebraska wholesale markets, allowing other retailers to purchase their items in bulk.

In 2000 Amy and Terry purchased the Goodhand Theater and with that business became too busy to continue making crafts for the wholesale market. They successfully ran both businesses until 2013 when patronage of both businesses slowed down too much to keep the theater open. They tragically lost the theater and everything they put into it over the years to the city at that time.

"I've always been artistic," Amy said. And it's true, one day she may be sewing a custom purse, the next working on one of her unique signs and the day after, stuffing and upholstering an antique chair.

When she was younger, although she enjoyed the process, she wanted her art to be perfect and was incredibly tense when creating things.

These days, when asked what her process is for creating her unique signs, she laughs and said, "I don't really have a process, I see a piece of wood and go hmmm.... and after a few minutes I just start."

She explains that when she was younger or in school she planned things out more. These days she is more relaxed and allows her creativity to flow and the outcome is often just as much a surprise to her as well.

When the business was thriving, they would go to market twice a year, always bringing new and unique items to their quaint shop.

"We have always been poor and wanted more than we could afford... so you learn, if you're going to have anything nice, to do it yourself. So I'm kinda a DIY-er," she said. "I absolutely love what I do, I love my job. I probably have the best job in the world, but it breaks my heart because what good is it if nobody (buys it)..."