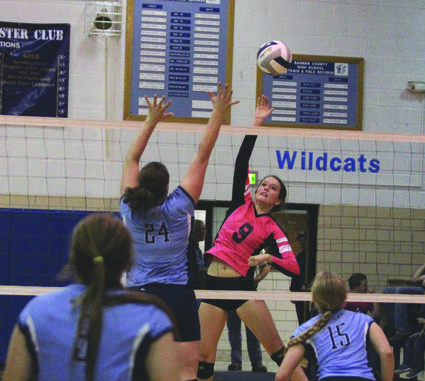 Audrey Juelfs (Potter-Dix) slams one over the net as Lady Wildcat MaKenna Dahlgrin attempts a block.

The Potter-Dix Lady Coyotes won handily against the Leyton Warriors on Tuesday, Oct. 18 in two sets before handing the same fate to their hosts, the Banner County Lady Wildcats.

Dawson Sharman and Trinity Langley led the attack with seven kills each, followed by Alexus Rozelle with four and Audrey Juelfs with two.

Sharman's one ace serve was matched by Payge Hoffman with no other aces from the Potter-Dix ladies.