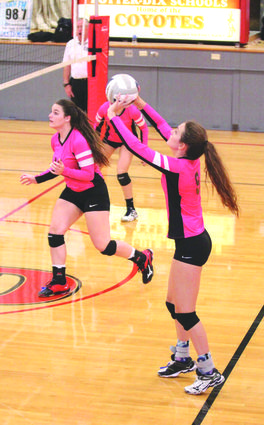 Audrey Juelfs (#9) sets the ball up for a kill by Alexus Rozelle during a triangular early this month. The Lady Coyotes are now 24-1 for the season and are ranked 4th in Class D-2.

The first game pitted the Potter-Dix girls, ranked first in their district, against the Minatare Indians for a handy win in two sets, 25-9, 25-8.

At the end of the first round of games, the field was cut from eight teams to four, with the Lady Coyotes facing hosts, the Bayard Tigers. Once again, just two sets later the aggressive Potter-Dix club chalked up another win, 25-17, 25-22.

And then, there were two. It came down to the rivals, the Lady Warriors of Leyton High Scho...