By Jimmie Earls for the Western Nebraska Observer

Lady Coyotes shut down the competition 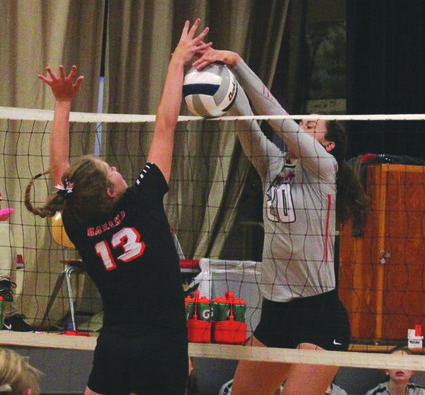 Trinity Langley stuffs the ball over the net and past a would be Bayard defender during the ladies Coyotes Sept. 27 triangular.

It was another clean sweep for the Potter-Dix Lady Coyotes last week as they rolled past both Bayard and South Platte in straight sets on Sept. 27 and notched another win against South Platte on Sept. 30. With the wins, the Lady Coyotes improve to 16-1 on the season.

Juelfs led in digs with 10, followed by Sharman with 8, Langley and Payge Hoffman each with 5 and Rozelle and Thies each with 4.

Sharman had 8 kills, with Juelfs and Rozelle right behind with 6 each, Langley had 2 and Thies had 1.

Thies' 18 assists led the team, Hoffman, Rozella and Huelfs had one each.

In the nightcap match, Potter-Dix took on South Platte, who has been up and down this season, going 2-4 in their six previous games going into the triangular. Clearly, this was not South Platte's night as the Lady Coyotes made easy prey of the Blue Knights, winning 2-0 (25-16, 25-7).

Serving was slightly down for the Lady Coyotes in the second match of the day, posting a 83.7 serve percentage. Juelfs served 100 percent, as did Ginny Herboldsheimer. Langley served 95 percent, Hoffman 77.8 percent, Thies 75 percent and both Rozelle and Sharman served 66.7 percent.

Hoffman led digs with 10, followed by Thies with 8, Sharman and Juelfs with 7 each, Rozelle with 6, Langley with 3 and Herboldsheimer with 1.

Juelfs and Langley each had 7 kills, Rozelle had 6 and Sharman had 4.

Thies again led in assists, this time with 20, while Hoffman had 2.

Rozelle's 13 kills led the team, followed close behind by Sharman with 12, Juelfs with 8, Langley with 7 and Hoffman with 1.

Serving was much better this go-round at 96.1 as a team. Serving 100 percent was Herboldsheimer, Langley, Thies and Juelfs. Hoffman served 94.7 percent, Sharman served 91.7 percent and Rozelle served 75 percent.

Rozelle had 4 blocks, Langley had 2 and Juelfs had 1.

Thies racked up 37 assists, while Hoffman had 1.

Next up for the Lady Coyotes is another triangular matchup Oct. 10 with Garden County and Wallace.