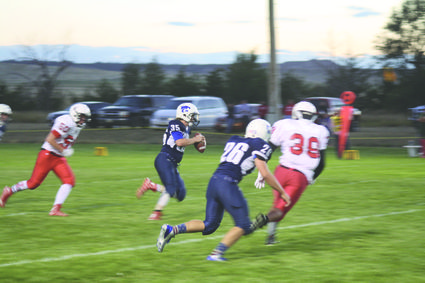 Gage Alexander, #35, ran the football for several yards, for a first down as teammate Seth Dvorak #26, takes down Minatare Indian, Ephroen Lovato.

The Banner County wildcats took one on the chin as they lost a conference game against Minatare, at home Friday, 45-83.

"Our biggest challenge was Minatare's size, I knew going in we would struggle with their size and that is what happened," coach Charles Jones said.

"I felt that they wore us down as the game went on and that is something that we struggle with in practice is simulating other teams size," he added.

Recognizing these things, coach Jones said they need to keep working on the fundamentals in practice.

Recalling the game, Jones did see some bright spots.