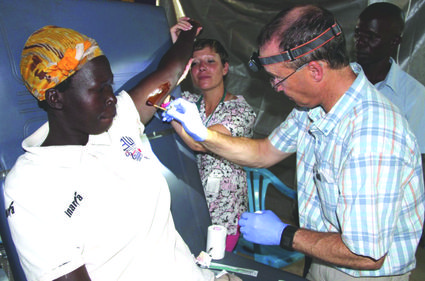 Dr. Broomfield used a headlamp to compensate for a lack of electricity as he prepared to replace a birth control implant for a Ugandan national while his wife, Sarah, in the background, holds the patient's arm still.

Imagine a country the size of Oregon with nearly 40 million residents. Now, imagine half of them are 16 years of age or younger, few have ever received medical care for any reason and most of the care given was without the aid of electricity.

That is what Dr. James Broomfield encountered on his recent trip to Uganda, where he traveled as part of a medical mission.

"There is really no health care of any appreciable amount in the northern part of Uganda," he said.

This trip was not the first of its kind for Broomfield in many ways, but it was his first opportunity to be a part of a medical mi...