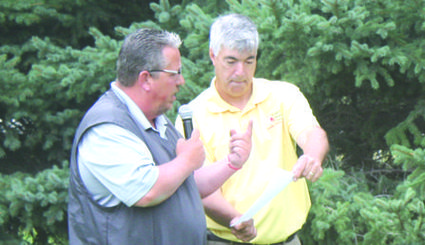 The 25th Annual Kimball Hospital Foundation Golf Classic held this past Sunday at the Four Winds Golf Course was termed "A huge success" by Kerry Ferguson, the man in charge. A total of 28 four-person teams made up of 112 golfers participated. Golfers were vying for bragging rights along with lots of attractive flag prizes, and raffle prizes, and were also treated to lunch and a buffet dinner after golfing. Everyone also received a Foundation Golf Classic moisture-wicking polo golf shirt.

The winning team made up of Ben Nagel, PA-C and a familiar face at the Kimball Clinic and Hospital where he cares for patients, along with Brent Fanning, Nick Tozack, and Hyinio Munoz shooting a round of 14 under par 58. Two teams tied for runner-up honors one stroke back with rounds of 59 and second place was decided by a score card playoff. Runner-up honors went to Ty Garrett, Gene Golding, Mike Isley and Aaron Koski. Third place was Pat O'Brien, Tom O'Brien, Nick Kuxhausen and Kirk Kuxhausen.

Kerry Ferguson, who also served as MC, asked to be sure and thank all of the many volunteers who gave of their time to ensure the tournament went smoothly, helping the Foundation in their efforts to raise money for a new bathing spa for their patients.