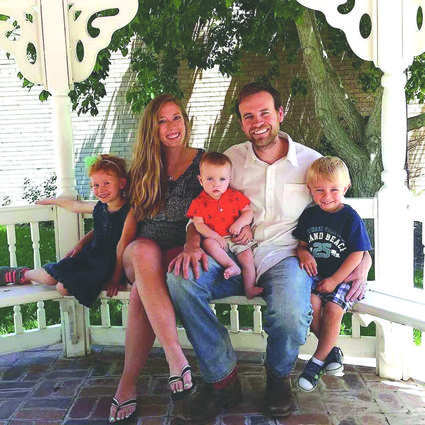 Drew Enevoldsen is shown here with his wife, Teran and their children, from left, Laela, Deker and Davin.

Drew Enevoldsen has a face nearly as familiar in Kimball as it is in his hometown of Potter, unless he is in full make-up, that is.

Currently the Assistant Vice President of the Potter State Bank, Enevoldsen is the fourth generation to be involved in the family business – banking. His great-grandfather, Fred Enevoldsen, was a share holder in the Potter bank in the 1930s and in 1945 he bought out the other shareholders.

Born and raised in Potter, Enevoldsen graduated in 2003 after being home-schooled. He landscaped with his father during work-study time throughout his high school years and became a youth advisor in the Lions Club at the age of sixteen.

Enevoldsen earned his Associates at WNCC in Sidney and continued college at Chadron State where he earned his Bachelor's in banking.

He married his wife, Teran, in 2008 and the couple now have three small children, daughter Laela (4), son Davin (2) and son Deker (7 months). Spending time with his family is his most favorite pastime, although he said that due to his busy schedule, it's not as often as he would like.

He began his banking career in Chadron as the Deposit Manager, but a phone call from his uncle, Potter State Bank president, Kirk Enevoldsen, brought him back home.

A building in Kimball was purchased and the Kimball State Bank would need a banker. In 2011 he was offered, and accepted, a position in the newest Potter State Bank venture.

In addition to a busy work schedule and active home life, Enevoldsen remains involved in Potter by serving as the director of the Potter Melodrama, as well as being one of the actors in the annual performance.

During the most recent performance, last month, the group performed the play "Jack and the Frankenbeanstalk", which is a mix of two different stories with modern-day humor and references to some shows from the 1930s.

He also participates in the Potter Days Legion Show, scheduled this year on Saturday, September 3 and Sunday, September 4, according to Enevoldsen.

Enevoldsen serves as the Lion's Club secretary, is on the Potter Days Committee, serves as chairman of the Potter CarBowl. He belongs to the Potter Historical Society and is a member of the Sons of the American Legion Post #291 and can be called on to serve as a stand-in for veteran services.

In Kimball he spent two years on the Kimball Historical Society board and has served on the Kimball-Banner County Chamber of Commerce board.

"Volunteerism has been a family activity since my Great-grandfather Fred Enevoldsen came to Potter in 1917, and my other Great-grandfather Paul Phipps came to Bushnell in the 1940's," Enevoldsen said. "They both served as mayor of their communities as well as being involved in many local service organizations. They wanted their towns to be a great place to raise a family and a place they were proud to call home."

He added that that community spirit was passed down to his father and his uncles, who included him in their projects as a youngster.

"My dad raised me to understand the importance of giving back to your community, and Potter will always been home to me," he said. "My thought is, regardless of the size of the town, we can all do something to make our communities better, and when you give of yourself the rewards that come back to you are tenfold in new friends and strengthened relationships."

Apart from spending time with his family, Enevoldsen enjoys fishing, hunting and doing some gardening. He added that his love for the outdoors began while he helped his father with landscaping years ago.

"I enjoy gardening. I guess if I could see myself in ten years, I would like to do a mini-farmer's market," he added. "I would enjoy that. It's something I could teach my kids, how to work the ground, and maybe raise a cow, or two."

Enevoldsen concluded that there was no doubt in his mind, regardless of what the future holds for him and his family, he believes that future is in his hometown – Potter.

"Organizations, events, and service projects are a way for communities to socialize together and build camaraderie, much like they did in the days of my great-grandparents. I have developed many new and lasting friendship from across the generations these past years," he said. "The education, knowledge, and appreciation for history I have received from the older generation has been an invaluable experience. These are just some of the treasures I would have missed out on had I not got involved in my community."