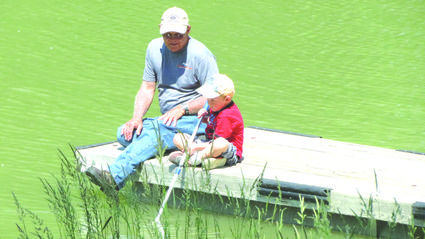 The 2nd Annual Bioblitz at Oliver Reservoir Recreation Area was hosted on June 17 and 18, by the Bird Conservancy of the Rockies and was made possible with a grant from the Nebraska Environmental Trust, according to Alexandra Mayes of the Bird Conservancy. More than 30 individuals enjoyed spending time in the sun, learning about some of the local wildlife and the processes that state organizations use to study nature, and obtain first-hand knowledge on the birds, insects, fish, plants, some reptiles, as well as other subjects regarding the western part of the state. The turnout for the two days of events was better than last year which was their first year and a trial to see how the event would be perceived, she added. This year the event will expand to the Fort Robinson State Park, Mayes said, a first for that area. "I think for the majority of folks, the chance to get outside and learn more about the native western Nebraska wildlife was what participants enjoyed the most. I believe the astronomy and plant sampling technique session were especially popular," Mayes said.