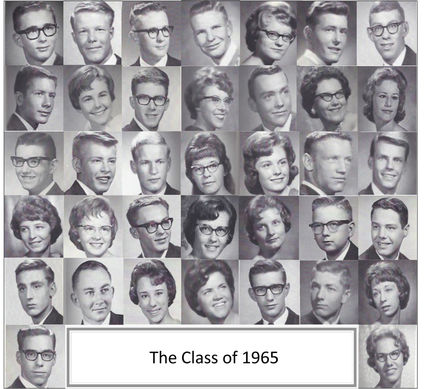 Graduates of the Potter High School Class of 1965 will serve as grand marshals for this weekend's Potter Days parade. The classmates were the first kindergarten class at the school to graduate.

The members of the Potter High School Graduating Class of 1965 have been named the 2015 Potter Days Grand Marshals, according to Potter Days Committee member Peg Musil.

The class of '65 graduated 37 students, though at one time there were 44 students in that class.

This weekend 24 of those graduates, from across the nation, will join together once again in Potter to reunite and celebrate.

Those graduates, who were also the first class to go from kindergarten through graduation in Potter, will be celebrating their 50th class reunion over the weekend as well.

The Class of '65, which began kindergarten in 1952, was a great all-round class, according to Heather (Christensen) Lipska, reunion co-chair person.

"It was a very diversified class throughout the years," Lipska said.

Today one of the graduates, Jeff Reetz, lives in Mozambique, Africa.

Though Lipska said she worked rather than participate in many activities, she remembers having the opportunity for volleyball, music, football and basketball as a Potter student.

Lipska further recalls neighboring Dix as their biggest rival throughout the years, though Dalton and Lodgepole were also tough opponents.

Those opponents had a great year on the football field in 1964-65, as the Potter football team went undefeated and won the first trophy given by the Minuteman Activities Conference according to 1965 graduate Hollis Anderson, who currently resides in Lincoln, but will be attending the reunion and Potter Days.

"I excelled in football, basketball and track. I was also in band and even speech and plays. There were a lot of different events for us," Anderson said. " We were Class C at the time and our senior year we went undefeated. We even played against Pine Bluffs and they were a better team in Wyoming."

Anderson believes he held the record for high hurdles at Potter High School for about 15 years.

"We were the first class that started kindergarten in the old school and were a baby boomer class. We were the largest even after the Dix consolidation," Anderson said.

Anderson joined the Nay reserves after attending Nebraska Wesleyan University, where his mother and his uncle both attended, followed by one year of graduate work.

"I work for the university now, and have since October of 1972," Anderson said. He is currently that scientific purchasing manager and he manages the supply contracts for the labs.

Anderson enjoyed the dryer climate and he enjoyed the trips his family, who lived north of Potter, took to the Colorado mountains.

Classmate Jeanne (Mathewson) Steele attended Sidney Business Institute following graduation, then began her career at Potter State Bank for nearly 15 years. She quit to raise her three children, all of whom graduated in Potter as well.

"Basically I like the quietness here, it isn't as busy," Steele said. "I was on the farm a lot growing up and I wasn't used to the busier life. And here, you don't always have to keep up with the Jones' to have a good life."

Steele said that though a lot has changed her classmates will still recognize the old school, because it has stayed exactly the same.

"But, you don't know your neighbors anymore because they are always busy working. When I worked at the bank, I used to know everyone," she said. "Unless you meet them at church or at a community event, many people don't know one another, but many of them don't have the time for that even though it is a small town."

Steele said the town is still just as welcoming and the people are still very friendly, even if they do not know one another.

"At Potter Days I am looking forward to the camaraderie, you see a lot of familiar faces that haven't been here for awhile," Steele said. "The class was close friends even though there was a bit of an age difference. We've always had reunions."

Some of the activities planned for those who attend will be supper at Bag's Bar followed by Tin Roof Sundaes at the Potter Sundry.

The graduates will then go to the bowling alley above the Sundry for some duckpin bowling and good conversation. They can watch the Potter-Dix Coyotes play football and volleyball and enjoy the fireworks that follow.

According to Lipska, some of the men will join the golf tournament and they will all attend the parade and stay to enjoy many of the Potter Days festivities before gathering for an ice cream social at Paul Hutchinson's home.