No one injured as fire destroys home south of Bushnell 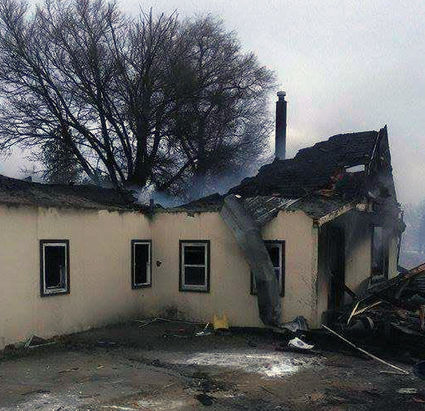 This farm house south of Bushnell was destroyed by a fire Monday morning. Garrett Purdy, his fiance Katelyn Duggan and their 2-year old daughter Karlie escaped the blaze unharmed.

No one was injured during an early morning house fire Monday approximately 14 miles south of Bushnell.

An aging farm house occupied by Garrett Purdy, his fiance Katelyn Duggan and their 2-year old daughter Karlie caught fire, according to the owner of the house, Gene Purdy. Gene is Garrett's father.

"They were sound asleep when the dog woke them. They woke up to thick, black smoke everywhere," Gene Purdy said. "They got out and (Garrett) went back in to get coats and came back out, but within a few minutes he wasn't able to back in. The scary part was how quickly it went up in flames."